How States Are Trying to Force Federal Government to Control Spending 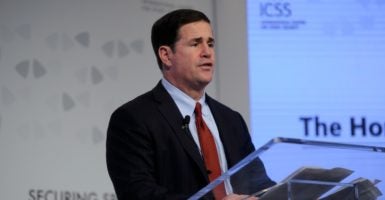 Arizona Gov. Doug Ducey signed legislation to join the balanced budget compact. Other states have also signed on to the idea of passing an amendment to control federal government spending. (Photo: Icss/Zuma Press/Newscom)

“The problem in Washington is the structure, you can replace everyone there and it’s not going to change,” Rakestraw, a Republican and immediate past chairwoman of the Compact for a Balanced Budget Commission, told The Daily Signal. “We are the peacekeepers of the world. If the dollar crashes, if America isn’t solvent as a nation, it becomes major security risk.”

Out West, the push by states to force the federal government to be fiscally responsible had mixed results this year.

Last week, Arizona Gov. Doug Ducey, a Republican, signed legislation to join the balanced budget compact, asserting in a statement, “With nearly $20 trillion in debt, a burden which will be paid for by our kids and grandkids, it’s time states took action to say, ‘enough is enough.’”

But, New Mexico’s Democratic House speaker, Brian Egolf, successfully led the effort this year to rescind the state’s resolution for a convention to pass a balanced budget amendment, which dates back to 1976. Egolf said, “With the current climate of the country, I have a hard time believing this would ever be a good idea.”

“Some people fear a runaway convention, when nothing could be further from the truth,” New Mexico state Rep. Yvette Herrell, a Republican who is a co-founder of the Balanced Budget Amendment Task Force, told The Daily Signal. “This thwarted an opportunity to help out the country back on solid financial footing. It’s the smart thing to do. States cannot spend outside our means. The federal government shouldn’t be allowed to.”

The comings and goings of states is no small matter, as even proponents of seeking a balanced budget amendment through an Article V convention don’t all agree with how many are on board.

Article V of the U.S. Constitution allows for a constitutional convention to be convened if two-thirds—or 34—of the states call for one. If a convention approves an amendment, three-fourths of the states—or 38—must vote to ratify it into the Constitution.

How far along the states are is the big question. Here’s why:

The Heritage Foundation’s “Blueprint for a Balanced Federal Budget 2017” calls for “moving towards a balanced budget amendment to constrain future attempts at circumventing budget caps.”

In the short term, a statutory spending cap is required, said Justin Bogie, senior policy analyst for fiscal affairs at The Heritage Foundation.

“A balanced budget amendment would take so long to get through with buy-in from other states, it’s more long term,” Bogie told The Daily Signal. “We want to do something in the meantime to try to get spending under control.”

Bogie said any amendment would need to have spending cuts and caps.

“We wouldn’t want an amendment to give room to raise taxes to cover increased spending,” he said.

The Compact for America contends those 29 state proposals are not identical, and would mean an undefined convention as opposed to the compact, which would streamline the process because states have already agreed to give an up-or-down vote to one specific amendment.

“Our position is that words matter, and if you take these various applications, one says X and another says Y . . . it’s hard to disregard what the states wanted,” Nick Dranias, president of the Compact for America Education Foundation, told The Daily Signal.

The compact proposal states that the constitutional debt limit would cap federal debt at 105 percent of the outstanding debt at the time of ratification; require Congress to get approval from a majority of state legislatures to take on more debt; require a supermajority in Congress for most tax hikes; but allow deficit spending for wars and other national emergencies.

“I would say, the downside to our proposal is what you see is what you get. Some state lawmakers might not like a comma placement or how a T is crossed,” Dranias said. “The advantage to the [Balanced Budget Amendment] Task Force is states can see whatever they want.”

Herrell, the New Mexico legislator and co-founder of the Balanced Budget Amendment Task Force, doesn’t see a problem in counting the total number of states backing an amendment.

“It’s a hard argument that if the exact language isn’t the same it does not count toward 34 states,” Herrell said. “The [Balanced Budget Amendment] Task Force has done an excellent job researching [state resolutions] and has seen enough proof. The task force would not be saying 29 if they were not certain. It should not have to be word for word.”

Both Dranias and Herrell stress that their group proposals are specific to a balanced budget amendment, to allay concerns of a runaway convention. Further, both noted it would still take just 13 states to prevent ratification of any amendment that emerged from a theoretical runaway convention.

An Article V convention might propose an amendment to restore or expand the liberties of the American people, but it also could propose an amendment that diminishes the liberties of the American people, or of some of the people. While it is no doubt true that the ratification process itself, requiring support from three-fourths of the states (38 at present), decreases the likelihood of some radical proposal ultimately becoming part of our Constitution, it is worth recalling that 27 of the 33 proposed amendments that have been sent to the states for ratification achieved the requisite number, and that was before the age of the internet and social media-driven campaigns that can dramatically increase public pressure on those who are considering such an amendment and reduce the time devoted to thoughtful reflection.

The Compact for America points to support from conservative commentator George Will, economist Stephen Moore, and Americans for Tax Reform President Grover Norquist.

According to the task force, Indiana became the first state legislature to pass an Article V application to propose a balanced budget amendment on May 8, 1957.

In 1983, Missouri became the 32nd state legislature to vote for a proposed amendment. However, from 1988 to 2010, 16 states rescinded the applications out of fear regarding a runaway convention, bring the number down to 16.