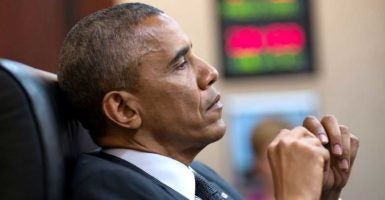 It has been reported that President Barack Obama's administration has made additional payments to Iran, which add up to $1.3 billion. (Photo: Pete Souza/Zuma Press/Newscom)

Allegations that President Barack Obama’s administration doled out ransom payments to Iran in exchange for prisoners have been fueled by new revelations about additional cash payments beyond the initial $400 million transfer that the administration already admitted.

The Wall Street Journal reported that the Obama administration, which had transferred $400 million in European currencies to Iran in January, followed up with two more cash shipments on Jan. 22 and Feb. 5 that amounted to $1.3 billion.

The administration attributed these payments to the resolution of an outstanding Iranian claim to recover $400 million that Tehran had paid before the 1979 revolution for airplane parts, along with $1.3 billion in accumulated interest.

Administration officials have denied that the payments constituted a ransom for four Iranian-Americans that Tehran released on the same day as the initial payment. But State Department spokesman John Kirby conceded on Aug. 18 that while the Iranian economic claim and the recent hostage issue were negotiated separately, the timing of the transactions was linked, to “retain maximum leverage” to ensure the release of the innocent Americans held by the Iranian government.

This revelation fueled charges that the administration had paid a ransom to free the prisoners. The administration’s foot-dragging on releasing information on the payments has angered many in Congress, particularly those who charged that such payments violated federal law, such as Rep. Mike Pompeo, R-Kan.

Now that Congress has returned from its summer recess, it plans to take action on the issue. Tuesday, two bills were introduced to block such payments, sponsored by Sen. Marco Rubio, R-Fla., and Rep. Ed Royce, R-Calif.

Today, the House Financial Services oversight subcommittee is holding a hearing to examine the Iran payment. Subcommittee Chairman Rep. Sean Duffy, R-Wis., has said that the big problem with the payments is that they were in cash—making them “untraceable.”

Although the steady drip of revelations about the administration’s cash payments to Iran is disturbing, Congress should also focus its attention on the substance of the Iran nuclear deal.

Last week, the Institute for Science and International Security issued a report that exposed secret exemptions that the United States and other countries negotiating with Iran had granted to Tehran to enable it to comply with its nuclear commitments and rake in sanctions relief on “Implementation Day” in January.

The exemptions included relaxing the caps on low enriched uranium (LEU), 20 percent LEU, heavy water production, and the number of large hot cells allowed to remain in Iran. One senior official cited in the report stated that without these exemptions, Iran’s nuclear facilities would not have been in compliance with the nuclear agreement by Implementation Day.

These concessions not only weakened the constraints on Iran’s nuclear program, but the fact that they were secretly made has prevented Congress and the American people from correctly assessing the Iran nuclear agreement, as well as Iran’s compliance with its nuclear commitments.

The more news that leaks out about the Iran nuclear deal and the administration’s Iran policy, the worse they look.

Implementation Day: Time for Iran to Cash in on Sanctions Relief and Hostages