Obama Administration Wants to Use Taxpayer Money to Settle Health Insurer Lawsuits. Here’s How a Republican Would Stop It. 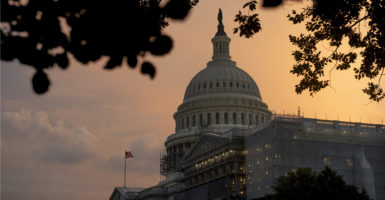 Republican Rep. Chris Stewart of Utah has mounted a campaign urging House Speaker Paul Ryan to initiate a lawsuit against the Obama administration over the potential use of a fund the Treasury Department oversees to pay federal legal claims to settle with insurance companies suing the government.

Stewart is circulating a letter to his Republican colleagues that would push Ryan to intervene to prevent the Obama administration from using the Judgment Fund, an indefinite appropriation created by Congress, to pay billions to insurers who are suing over Obamacare’s risk corridor program.

So far, at least 10 members have signed on to his letter to Ryan.

“Such an egregious misuse of taxpayer funds is not only a violation of the law but also represents an institutional challenge to the legislative branch, and should be met with the fullest opposition from the House of Representatives,” the letter states. “If such a payment is not met with a challenge from Congress, there is no limit to any administration’s ability to decide which of its priorities it funds.”

AshLee Strong, spokeswoman for Ryan, said they are looking at options.

“By passing the [Sen. Marco] Rubio amendment, Congress has been clear that no taxpayer dollars are to go to failing insurance companies under Obamacare,” she said in an email to The Daily Signal.

Insurance companies filed lawsuits against the Department of Health and Human Services earlier this year over the risk corridor program, which was written into the Affordable Care Act and designed to provide insurers with stability during the first few years of the law’s implementation.

Under the risk corridor program, insurers that had excess profits paid into a fund operated by the federal government. Those that incurred excess losses received money from the fund.

Because many insurers experienced significant losses during the 2014 benefit year, insurance companies received just 12.6 percent of the payments they expected to receive from the risk corridor program and are now arguing they’re entitled to the remaining money.

The Obama administration has signaled it is open to discussing settlements with those companies, and if it decided to do so, it would tap into the Judgment Fund to pay out billions of dollars to insurers.

“They hoped this thing would slide under the radar and no one would notice,” Stewart told The Daily Signal. “The Judgment Fund has been abused in the past, but never anything like this, for heaven’s sake. It was a few $10 million a year that the Judgment Fund was paying out, not something more than $1 billion, which is what this administration is inviting the insurers to do: Sue us, and we’ll settle. We’ll settle before we leave office.”

“It’s crony capitalism at its worst,” he continued.

In his letter, Stewart urges Ryan to “initiate a civil action” on behalf of the lower chamber in federal court. Authority to do so, the letter states, would be granted under a House resolution passed in 2014.

That resolution authorized the cost-sharing reductions lawsuit filed against the Obama administration.

Because the House resolution approved the initiation of or intervention in any civil action “with respect to implementation of any provision” of Obamacare, legal experts told The Daily Signal in March that it gives Congress the authority to intervene in the risk corridor case.

Stewart said he prefers lawmakers find a “legislative fix” to prevent the Obama administration from using the Judgment Fund to settle with insurers in the risk corridor lawsuits when they return from an extended recess in November.

However, he views legal action as a “backstop” and said the White House has already found ways to ignore legislation passed by Congress regarding the risk corridor program.

“We thought we dealt with this legislatively already, and the language is very, very clear on this,” he said. “The administration continues to find creative ways to circumvent obvious legislative language.”

Late last month, the Justice Department filed motions to dismiss lawsuits filed by two insurers—Moda Health Plan and Blue Cross and Blue Shield of North Carolina—on the grounds that there is no deadline by which risk corridor payments must be paid.

This contradicts statements from the Centers for Medicare and Medicaid Services and its top officials, which have said the government would explore the option to settle.

In addition to Stewart’s letter, which was first sent to GOP lawmakers Thursday, Republicans in both chambers have expressed concern about use of the Judgment Fund in additional letters to Sylvia Mathews Burwell, secretary of the Department of Health and Human Services; Andy Slavitt, acting administrator for the Centers for Medicare and Medicaid Services; and Loretta Lynch, U.S. attorney general.

More than 40 House members, Stewart included, sent Burwell a letter late last month warning that any attempt to settle with insurance companies through the Judgment Fund “will be met with the strictest scrutiny” from Congress.

Republican Sens. John Barrasso of Wyoming, Mike Lee of Utah, Marco Rubio of Florida, and Ben Sasse of Nebraska sent a separate letter to Burwell, Slavitt and Lynch asking for additional information on whether the Obama administration plans to settle with insurers.

Before working at the Centers for Medicare and Medicaid Services, Slavitt worked for OptumInsight/QSSI, the sister company of UnitedHealthcare and a subsidiary of UnitedHealth Group.

UnitedHealthcare is the nation’s largest insurance company, and Slavitt received an ethics waiver from the White House in 2014 that allowed him to begin working on matters involving his former employer immediately.

Slavitt’s history with UnitedHealth Group is raising questions for Stewart.

“He shouldn’t be sitting in a position to make this decision,” Stewart said of Slavitt. “That’s an example of why my Republican colleagues and I hope others are going to be interested in this.”

“Once [Republicans are] aware of what CMS is recommending, that the administration is trying to sue and settle and do it very quickly with an enormous amount of money, when the obvious conflict between the person who’s advocating this and his own personal interest in the industry that he worked with, we’re going to have a lot of interest,” he continued.

A spokesman for the Centers for Medicare and Medicaid Services directed a request for comment to the Justice Department.

Stewart called the revolving door of administration officials to and from the insurance industry an example of crony capitalism.

“We’re seeing it here,” he said of the risk corridor lawsuit, “but it’s not the first time that we’ve seen it. The Affordable Care Act is rife with examples of this, and they do it at the expense of the American taxpayer.”

Insurance companies filed lawsuits earlier this year after learning they would receive a fraction of the money requested from the risk corridor program.

The shortfall in risk corridor payments was the result of an amendment added to 2015 and 2016 government spending bills prohibiting the administration from using taxpayer dollars to fund the payments requested by insurers through the program.

Because of those restrictions, insurance companies participating in Obamacare’s exchanges received a collective $2.5 billion less than originally anticipated. Many smaller insurers, including several of 23 consumer operated and oriented plans, or co-ops, closed their doors because of the lower-than-expected risk corridor payments.

Settling with insurers would provide the White House with a way to give insurers their full risk corridor payments, effectively circumventing Congress.

This article has been updated to include a comment from the Centers for Medicare and Medicaid Services.