Obamacare Insurers Could Get Billions From Controversial Government Fund 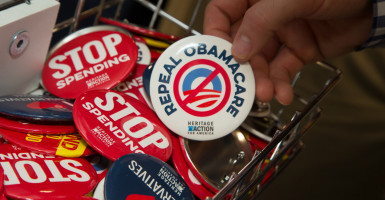 Health Republic Insurance of Oregon filed a $5 billion class action lawsuit against the Obama administration over the risk corridor program. If the lawsuit leads to a settlement, the money could come from the Judgment Fund. (Photo: Jeff Malet Photography/Newscom)

A $5 billion lawsuit filed by a nonprofit insurer against the Obama administration for a program implemented under Obamacare is raising questions about the use of a fund available for settlements with the government and whether Congress can, and should, intervene.

According to legal experts, if the Obama administration decided to settle its class action lawsuit with Health Republic Insurance of Oregon, one of 23 co-ops started under Obamacare, and other insurers for all or part of the $5 billion it’s seeking, the money would come from the Judgment Fund, an indefinite appropriation created by Congress and administered by the Department of Treasury.

Health Republic Insurance of Oregon’s lawsuit was filed on behalf of insurers participating in Obamacare’s risk corridor program, and specifically those who did not receive the full amount of money requested through it.

“In this case, the argument is the statute requires the government to pay out for the risk corridors, but Congress refused to appropriate the money to do that and therefore the court is going to have to award a judgment since the administration, under the direction of Congress, is violating the law,” Timothy Jost, a law professor at Washington and Lee University School of Law, told The Daily Signal of the lawsuit.

“And therefore the money has to come out of the Judgment Fund that the Court of Claims has to award a judgment against the federal government, which is appropriated money,” he continued.

The Obama administration’s use of the Judgment Fund has come under fire in recent years, particularly after it was reported the Justice Department used the fund to pay billions to farmers who alleged discrimination by the Department of Agriculture, circumventing Congress.

“The Obama administration has a history of using the Judgment Fund,” Hans von Spakovsky, a senior legal fellow at The Heritage Foundation, told The Daily Signal. “They cannot be trusted to properly defend the lawsuit.”

Von Spakovsky, who worked at the Justice Department during President George W. Bush’s administration, specifically warned of the White House’s history of “sue and settle cases,” which he said allows parties to circumvent federal statutes and regulations and receive large sums of money through settlements with the government.

“They’re getting political friends to sue them and settle without going to Congress,” he said.

A spokeswoman for the Justice Department said the agency is reviewing the complaint, but had no further comment.

Republicans have criticized the Obama administration for promising insurance companies payouts through the risk corridor program, a temporarily program aimed at mitigating risk for insurers participating in Obamacare.

GOP lawmakers argue the program amounts to an insurer bailout.

Though the Obama administration reassured insurers in a November letter they would use future contributions to the risk corridor program to pay the full requested amounts for 2014, Congress hasn’t signaled it’s willing to cooperate.

“What the insurers are doing is tricky. It’s an end run,” Seth Chandler, a law professor at the University of Houston Law Center, told The Daily Signal. “It’s an end run around congressional prohibition. It’s saying, ‘OK, you said the Treasury couldn’t spend money. You’ve broken your promise, and because you broke your promise, we’re going to sue you for breach of contract.’”

Both Chandler and Jost agreed that though the Justice Department could opt to settle the case with insurers, though they differ on what they believe would be the administration’s position in the case.

“It might appear to be in the Obama administration’s interest to just give the insurance companies either all or some chunk of what they want,” Chandler said. “But in my view, that’s an incredibly foolish position to take because what happens when the next president comes in or the next Congress comes in, makes promises for programs down the road, years hence, and then Congress cuts it off, but now someone claims that they can sue for the money?

“That just eviscerates Congress’ power over appropriations,” he continued.

Jost, meanwhile, said the Justice Department historically defends the position of Congress. In this case, that position would be that Congress never appropriated money for the risk corridor program.

“Even if, as a matter of policy, if the administration disagrees with it, they would still defend it, which is, in fact, what administrations usually do,” he said. “If Congress passes a law, usually the Justice Department defends it. Not always, but usually.”

Citing another suit the House of Representatives filed against Department of Health and Human Services Secretary Sylvia Mathews Burwell over cost-sharing reductions, Chandler said Congress could argue they have a legal interest in the case.

“In the cost-sharing reductions lawsuit, what Congress seems to be complain about is the executive branch spending money out of the Treasury without any appropriation by Congress,” he said. “In this lawsuit, it’s the same thing—trying to prevent the lawsuit from becoming a vehicle whereby the administration pays money that has not been appropriated.”

The House passed a resolution in 2014 authorizing the cost-sharing reductions lawsuit against the Obama administration, and because the document approved the initiation of or intervention in any civil action “with respect to implementation of any provision” of Obamacare, Chandler said it gives Congress the authority to intervene in the risk corridor case.

“We don’t know what the administration is going to do, but people in Congress do have reason to be concerned,” he said. “Intervention is the clearest way of proceeding.”

The lawsuit claims that the Obama administration violated the statutes of the Affordable Care Act outlining the risk corridor program, specifically because the Department of Health and Human Services did not pay out the full amount insurers requested under the program.

The risk corridor program, implemented from 2014 to the end of 2016, was designed to mitigate the risks associated with selling insurance on Obamacare’s federal and state-run exchanges. Insurance companies that reported excess losses were entitled to payments from the Centers for Medicare and Medicaid Services, which were to be funded, in part, by contributions to the program made by insurers who reported excess profits.

Republicans in Congress, led by Sen. Marco Rubio, R-Fla., though, anticipated requested payments to insurers would be greater than contributions into the risk corridor program. The GOP-led Congress prohibited the Obama administration from using any taxpayer dollars to pay insurance companies requesting money.

As a result of the prohibition, which was included in omnibus spending bills for 2015 and 2016, the Obama administration could pay out just 12.6 percent, or $362 million, of the $2.87 billion insurance companies requested and expected to receive for 2014.

Several insurance companies, including Health Republic Insurance of Oregon and five other co-ops, closed their doors after learning they would not receive the full amount requested under the risk corridor program.

Many included their full risk corridor payments in their financial forecasts, which helped pad their bottom lines.