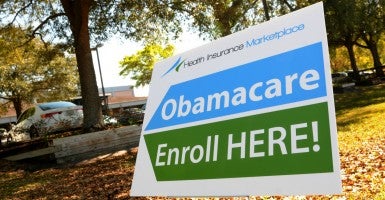 Yes, the March update to the Congressional Budget Office’s January 2015 estimates of the cost of Obamacare over the next decade contains some good news—overall projected costs have gone down.

But, as the report explains, although CBO has changed many of its projections for Obamacare, little of the difference is actually attributable to Obamacare.

Instead, changes in Obamacare projections stem from changes CBO made to insurance coverage estimates before 2014, based on updated data from household and employer surveys. In other words, CBO has adjusted what the coverage landscape looked like before Obamacare, so Obamacare’s impact on this landscape now looks different.

As the March update explains:

In addition, CBO has changed its assumptions regarding health care cost growth over the next decade. Health care spending growth slowed again in 2013, as has been the trend since 2006 (prior to Obamacare). Typically, as a trend grows stronger, so does CBO’s confidence in the trend. With the new 2013 data, CBO projects the slowing of health care spending to continue at a somewhat greater degree than it assumed in previous years. Thus, CBO’s projections for private health care costs are now lower than previous reports.

As a result, these changes in the assumptions also have an effect on Obamacare projections. Obamacare’s exchange subsidies are projected to cost less since health care costs are now projected to be lower. CBO estimates spending on Obamacare’s exchange subsidies will cost 20 percent less than estimated in its January projection, yet still cost $849 billion from 2016-2025. CBO also expects somewhat lower exchange enrollment, which contributes to lower projected costs as well.

In addition, projected Medicaid spending from Obamacare’s provisions is now expected to be 8 percent lower over 2016-2025 than CBO estimated in January. This is mainly because the CBO has changed its estimate of Medicaid enrollment prior to the law’s Medicaid expansion, based on updated data from the Centers for Medicare and Medicaid Services. CBO now says there were about 2 million more people enrolled in Medicaid prior to 2014 than originally estimated. Thus, since more people were already enrolled, CBO lowered its projected gains in Medicaid enrollment as a result of the law and has lowered its spending projections as well.

Obamacare is now projected to cost less than CBO projected in January, but it is because of factors outside of the law—not because Obamacare contains miraculous cost-saving policies.