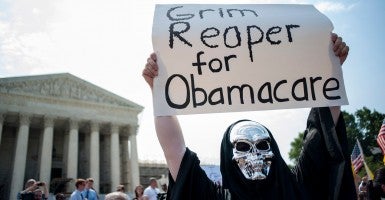 Millions of Americans are facing new tax penalties in 2015 courtesy of the Affordable Care Act. Fines for failing to purchase health insurance are set to double, and for the first time, the Internal Revenue Service is gearing up to collect.

Obamacare’s individual mandate requires citizens to purchase health insurance or pay a penalty. The mandate took effect in 2014 but leveled a comparatively modest fine: either a $95 per person fee or a 1 percent income tax penalty—whichever is higher.

This year, fines increase to $325 or 2 percent of taxable income. And for the first time, citizens will report their health insurance status directly to the IRS.

Hardship exemptions exist, but time is running out to file them as open enrollment ends Feb. 15.

The law includes more than 30 different exemptions with differing methods of opting out. Some may be filed with a normal tax return. Others require separate paperwork that must be mailed directly to the U.S. Department of Health and Human Services.

According to the Associated Press, the IRS has taken additional steps to speed up the exemption approval process. Even then, IRS Commissioner John Koskinen has admitted that telephone customer service could suffer dramatically. The New York Times reports that budget cuts may limit the agency to answering just half of telephone inquiries. Private companies and non-profit organizations have stepped in to help. Turbo Tax has launched an online “Health Exemption Check,” and the Tax Policy Center has created a penalty calculator.

Stan Dorn of the Urban Institute forecasts “a real train wreck after Feb. 15.”

“People will file their tax returns and learn they are subject to a much larger penalty for 2015, and they can do absolutely nothing to avoid that,” he told the Associated Press.

These events will unfold against a new congressional backdrop and political landscape. The 114th Congress will be sworn in on Jan. 6, and the Supreme Court will hear a new challenge to Obamacare in March.