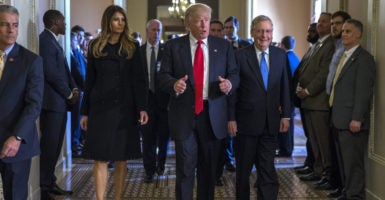 Insurance companies hoping for relief in the form of changes to two Obamacare programs may end up disappointed now that President-elect Donald Trump is preparing to take the White House.

Obamacare’s risk corridor and reinsurance programs sunset at the end of the year, but conservative groups are worried that Congress would attempt to give insurers more money through the programs during the lame-duck session.

Insurance companies spent millions lobbying lawmakers on the two programs, which distributed money to insurers that lost money and enrolled populations that were sicker and more costly.  But the election of Trump to the presidency makes it less likely that Congress will alter the two programs—referred to as “bailouts” by conservatives—to benefit those insurers.

“The lessons that we’ve learned from the election is people clearly don’t like [Obamacare] and are harmed by the law. They want it repealed,” Nathan Nascimento, a senior policy adviser at Freedom Partners, told The Daily Signal.

“I think President-elect Trump is looking at a bunch of different scenarios, and if he were smart, which I think he is, and he’s trying to be the voice of the people, then he should heed their call and make sure the taxpayers are made whole before giving preferential treatment to insurers,” he continued.

The risk corridor and reinsurance programs were intended to help mitigate insurers’ risks during the first few years of Obamacare’s implementation. The programs haven’t been as successful for insurers, which caused some small companies to close their doors and others to leave Obamacare’s exchanges.

In response to action from Republicans in 2014 and 2015, which left insurers with less money in risk corridor payments than anticipated, more than a dozen insurers sued the Obama administration over the program.

Conservative groups like Freedom Partners and Republican lawmakers have cautioned that the Justice Department could attempt to settle with insurance companies and tap into the Judgment Fund, an indefinite appropriation created by Congress and administered by the Treasury Department, to pay out those settlements.

In an effort to prevent that from happening, Republican Sens. John Barrasso of Wyoming, Mike Lee of Utah, Marco Rubio of Florida, and Ben Sasse of Nebraska introduced legislation Friday prohibiting the government from using the Judgment Fund or other federal funds to pay settlements related to the risk corridor program.

“We are going to repeal and replace Obamacare, but in the meantime, the last thing Americans need is for the Obama administration to sneak in one last bailout on its way out the door,” Sasse said in a statement Friday.

With Trump in the White House next year, health policy experts say it is doubtful the president-elect will settle with insurers.

“I would imagine once the Trump administration takes office, settlement would be very unlikely,” Timothy Jost, a law professor at Washington and Lee University School of Law and a supporter of the Affordable Care Act, told The Daily Signal.

Still, Trump won’t be inaugurated until Jan. 20, so there remains a possibility that the Obama administration would attempt to settle with insurers before leaving office.

“It’s still a legitimate threat,” Nascimento said. “There are lawsuits that are pending, and the concern is whether or not the Obama administration will still move forward with trying to settle out of court claims.”

Under the reinsurance program, the Obama administration was supposed to prioritize payments to the Treasury over the insurance companies. But GOP lawmakers have accused the White House of diverting $5 billion intended for the Treasury to those insurers.

A September legal decision from the Government Accountability Office found the Department of Health and Human Services broke the law in giving this money to insurers before the Treasury.

Republicans in the House and Senate, led by Sasse and Rep. Mark Walker of North Carolina, are urging the government to repay the $5 billion to the Treasury, and a bill from Sasse and Walker would cut the Department of Health and Human Services’ budget if the money isn’t recouped.

Insurers, though, are lobbying Congress to oppose the bill, and America’s Health Insurance Plans, a trade group, said changes need to be made to both the reinsurance and risk corridor programs.

With Republicans maintaining control of the House and the Senate, Nascimento said Congress should attempt to recover the $5 billion in 2017.

“That’s where Trump really should throw down a marker,” he said, “and say, ‘Look, we’re not bailing out insurance companies. We’re not doing the sue-and-settle, and these dollars need to go back into the Treasury, and we’re going to make sure it goes back there.’”

“Those dollars need to go back into the Treasury. They were illegal given, and the Treasury needs to be made whole,” Nascimento continued.

Insurance companies haven’t received their reinsurance payments for 2016—they will be disbursed in 2017—and if Congress or the Trump administration forced the Department of Health and Human Services to repay the $5 billion to the Treasury, insurers would lose out, Jost said.

“The effect is going to vary from insurer to insurers,” he said. “It’s possible some will go insolvent and for most, it’ll be a big loss. For some, it might make it less likely they’ll continue to participate in the program for 2018, which is a decision they’ll have to make.”