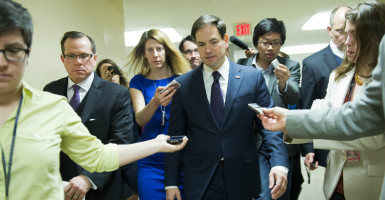 Sen. Marco Rubio, R-Fla., is leading a charge of conservative House members and leaders of prominent groups who are calling on Republican leadership to restrict the federal government's access to taxpayer dollars to fund Obamacare's risk corridor program. Republicans included a provision defunding the program in its reconciliation package. However, it was removed following a ruling from the Senate parliamentarian. (Photo: Kevin Dietsch/UPI/Newscom).

Senate Democrats blocked GOP efforts Thursday to repeal Obamacare’s risk corridor program, which Republicans have referred to as a taxpayer-funded bailout of insurers. Now, conservatives are looking to the $1.1-trillion omnibus spending bill to continue restricting the use of taxpayer dollars for the program.

As Congress begins to debate this year’s omnibus spending bill, Sen. Marco Rubio, R-Fla., is urging GOP congressional leaders to use the must-pass legislation as the vehicle to further restrict the program’s access to taxpayer dollars.

“If the only way Obamacare can continue is for taxpayers to bail out health insurers that lose money because of it, that’s as good an indication as any that the whole law should be repealed and replaced,” the Florida senator wrote in a letter to Republican leadership last week. Rubio continued:

It is our responsibility to completely shield the U.S. taxpayer from a deal in the omnibus that might reimburse health insurers retroactively for these losses or any other future losses. The best way to do this is to include the language in the omnibus that we have already used twice to prevent a taxpayer-funded bailout.

Republican Reps. Jim Jordan of Ohio and Tim Huelskamp of Kansas echoed Rubio’s displeasure with the risk corridor program and said at an event on Capitol Hill earlier this week they would oppose any measure that provided additional money to it, as would the approximately 40-member House Freedom Caucus, which Jordan chairs.

“We certainly don’t want to bail out Obamacare and [be] bailing out big insurance companies,” Huelskamp said.

Prominent conservative leaders also called on Republican leadership to continue restricting the use of taxpayer dollars for the risk corridor program, as the language included in last year’s spending bill did, in a letter sent last month.

“The risk corridor program represents a microcosm of [Obamacare], and one of its most insidious provisions, as it attempts to hide the true costs of Obamacare from insurance companies and beneficiaries, and instead spread it out among hardworking taxpayers,” the letter read. “Eliminating the risk corridor program’s ability to do this represents a major blow to the law and a step toward increasing transparency in Obamacare’s exchanges.”

On Thursday, the Senate used a budget tool known as reconciliation to pass a package, 52-47, repealing key components of Obamacare and stripping Planned Parenthood of its federal funding for one year. The reconciliation package was unveiled by Senate Republicans earlier this week and originally included a provision to repeal the law’s risk corridor program.

During debate over the reconciliation bill Thursday, Sen. Patty Murray, D-Wash., objected to the provision repealing the risk corridor program, saying it violated the Byrd Rule—which mandates provisions of a reconciliation bill be budgetary in nature—and arguing that the measure served political interests.

“It is yet another effort to pander to the extreme political base rather than working with us to strengthen health care for our families,” Murray said.

Murray’s objection earned ire from Rubio, who was instrumental in restricting the money available for the risk corridor program during the 2014 government spending debate.

Since 2013, Rubio has been a consistent voice against the risk corridor program, which he argues serves as a taxpayer-funded bailout of insurers.

During debate over the $1.1-trillion omnibus spending bill in 2014, the Florida Republican limited the amount of money available for the risk corridor program by introducing a provision prohibiting the use of taxpayer dollars for it. Instead, the Centers for Medicare and Medicaid Services could use only fees collected by the insurance companies themselves.

The risk corridor program, which is in place until 2017, is intended to provide stability for insurers in the health insurance market. The program requires insurers profiting above a specified threshold to share a portion of their profits with the federal government. Those that lose more than a specified threshold, meanwhile, receive financial assistance from the government.

However, conservatives have warned that the program services as a “bailout” for insurance companies that fail to profit under Obamacare.