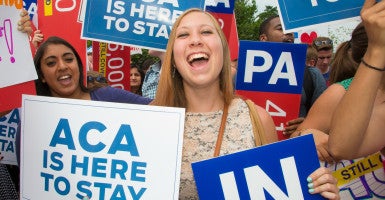 "Don't take my care," demonstrators chant outside the Supreme Court. In a 6-3 decision in June, the court upheld tax subsidies for Obamacare. (Photo: Jeff Malet Photography/Newscom)

One of the more than 20 failed or struggling “consumer-oriented” insurers created by Obamacare is suing the U.S. government for as much as $5 billion in payments it claims are owed to itself and other insurers.

Dawn Bonder, CEO of Health Republic, told the Portland Business Journal the company hopes to win as much as $5 billion for insurers.

Health Republic, which closed its doors at the end of 2015, attributed its demise to an announcement from the Department of Health and Human Services in October that Obamacare’s “risk corridor program” would pay a prorated rate of 12.6 percent of the funds insurance companies requested and expected to receive in 2014.

“The government’s failure to satisfy its monetary obligations and make its required risk corridor payments will have wide-reaching effects on millions of Americans in the form of restricted health plans and higher insurance premiums,” the lawsuit, filed Feb. 24, says.

Health Republic of Oregon is one of the 23 originally created. The government loaned $2.4 billion to them, but 22 lost money in 2014, and 12, including Health Republic, have shuttered since.

As The Daily Signal has reported that at least six of the 22 struggling or closed organizations pointed to lower than expected risk corridor payments as a reason for their flopping.

“The problem that you have here is, some insurers basically counted on this money, and the others didn’t,” Ed Haislmaier, a senior research fellow in health policy studies at The Heritage Foundation, told The Daily Signal. “That’s why half of the co-ops are still with us.”

The Affordable Care Act designed a temporary risk corridor program to run from 2014 to 2016. It was to help entice insurance companies to participate by acting as a safety net and cutting the risk associated with insurers’ entering Obamacare’s health care marketplace, or exchange.

The Centers for Medicare and Medicaid Services, which oversees implementation of Obamacare, paid insurers $362 million of $2.87 billion requested through the program for 2014.

The insurance companies say they didn’t receive over $2.5 billion in requested funds.

Health Republic filed the class action against the U.S. government, acting through the Centers for Medicare and Medicaid Services and its parent agency, the Department of Health and Human Services.

Health Republic determined that it is owed $7.1 million under the risk corridor program. It estimated that it will be owed about $15 million in payments for 2015, with the exact amount to be determined later this year.

The lawsuit seeks, on behalf of Health Republic and similarly situated insurers, immediate payment in full for 2014 and for 2015 as soon as the amount is finalized. Other issuers and insurers also could benefit financially.

Like every health insurer in the post-ACA market, we knew the costs of this new population could be astronomical, but we couldn’t be sure until we learned who purchased our plans and analyzed their medical costs under the new ACA plans. Without the risk-sharing provisions in the ACA, especially [the] risk corridor, we, along with every other health insurer across the nation, would have been forced to think long and hard about how to proceed in these new uncharted waters created by the ACA. It is unconscionable for the government to default on their obligation to pay the risk corridor amounts owed in a timely manner.

Bonder said full risk corridor repayment would allow it to pay back the federal loans, the Portland Business Journal reported.

Heritage’s Haislmaier wrote in an article published in Forbes:

Differences in management styles were also reflected in the differing assumptions that insurers made about the ACA’s ‘risk corridor’ program. Under that program, insurers with higher than expected gains pay into a pool, with those funds then distributed to carriers with larger than expected losses.

Several of the failed co-ops have publicly blamed the federal government for pushing them over the edge by not giving them sufficient risk corridor payments. In particular, they fault the administration for misleading them about how much money would be available and Congress for insisting that the program operate on a budget-neutral basis.

The lawsuit points to provisions included by Congress in spending bills for 2015 and 2016 that prohibit taxpayer dollars being used to bail out insurers under Obamacare’s risk corridor program. It claims that those provisions are a reason insurers did not receive the full $2.5 billion.

“Health Republic’s personal experience demonstrates the cascading, fatal effects the spending bill provisions have had, even on companies that did everything right,” the complaint says. It adds:

When it began providing insurance coverage under the Affordable Care Act, Health Republic offered plans with bronze, silver, gold and platinum-level coverage all at extremely competitive prices. It bears noting that Health Republic was not the lowest priced plans in the market; their rates were in the middle of the pack of the 10 carriers listing on the Oregon insurance exchange.