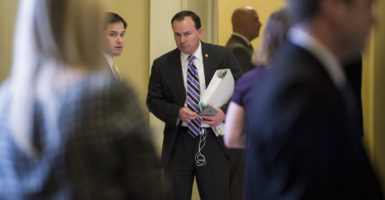 Republicans in the House and Senate, including Sens. Marco Rubio of Florida and Mike Lee of Utah, sent letters to the Obama administration raising concerns about a possible "bailout" of insurance companies. (Photo: Bill Clark/CQ Roll Call/Newscom)

GOP lawmakers in the House and Senate are pressuring the Obama administration for additional information on whether it plans to settle with insurance companies suing the government over a program written into Obamacare, which they warn would serve as a “multibillion dollar bailout” of those insurers.

Republicans in the House and Senate sent separate letters to top officials with the Department of Health and Human Services, Department of Justice, and Centers for Medicare and Medicaid Services raising concerns over the possibility of the Justice Department tapping into the Judgment Fund to settle lawsuits filed by insurance companies over Obamacare’s risk corridor program.

The risk corridor program was written into the Affordable Care Act and designed to provide insurers with stability during the first few years of the law’s implementation.

“This program was originally intended to be implemented in a budget neutral manner,” Republican Sens. John Barrasso of Wyoming, Mike Lee of Utah, Marco Rubio of Florida, and Ben Sasse of Nebraska wrote in a letter to Attorney General Loretta Lynch, Department of Health and Human Services Secretary Sylvia Mathews Burwell, and Acting Administrator for the Centers for Medicare and Medicaid Services Andy Slavitt.

“This intention was confirmed when Congress passed, with presidential approval, two separate provisions of appropriations law confirming its budget neutrality,” the letter continued. “It now appears the administration is preparing to circumvent these actions.”

The Republican senators said they have “grave concerns” about the potential for settlements with insurers.

Insurance companies filed lawsuits earlier this year after learning they would receive a small fraction of the money requested from the risk corridor program.

But Rubio and Senate Republicans included an amendment in 2015 and 2016 government spending bills prohibiting the government from using any taxpayer dollars to fund payments requested by insurers through the program. Under Rubio’s provision, the federal government could only use money collected from insurers to make those payments.

Because of those restrictions, insurance companies participating in Obamacare’s exchanges received just 12.6 percent of the money they intended to get from the risk corridor program—a collective $2.5 billion less than originally anticipated.

Many smaller insurers, including at least four of 23 consumer operated and oriented plans, ended up closing their doors because of lower-than-expected risk corridor payments.

Congressional Republicans began to sound the alarm over use of the Judgment Fund after insurers filed the lawsuit. Settling with insurers, they warned, would give the White House a way to provide the companies with their full risk corridor payments, effectively circumventing Congress.

“Any attempt to settle these cases out of court as a backdoor way to direct taxpayer dollars to insurance companies through the Judgment Fund will be met with the strictest scrutiny from Congress,” more than 40 GOP lawmakers wrote in one of the letters, sent to Burwell last week.

The Republicans go on to signal they would be willing to file their own lawsuit against the administration.

“Should the administration seek to make settlements in any pending lawsuit regarding risk corridor payments, we remain committed to exhausting all legislative and judicial options to ensure the power of the purse vested in Congress under the Constitution is respected and maintained,” the letter continues.

Republicans further stepped up their pressure on the Obama administration regarding potential use of the Judgment Fund following the release of a Sept. 9 memo from the Department of Health and Human Services on risk corridor payments for the 2015 benefit year.

In its memo, the agency addressed the lawsuit filed by insurers over the risk corridor payments for 2014 and said it would be “open to discussing resolution of those claims.”

Then, in a hearing before a House Energy and Commerce subcommittee earlier this month, Slavitt indicated officials from his agency had discussed with the Justice Department a potential settlement with insurers over the risk corridor program.

Nicole Navas, spokeswoman for the Justice Department, said the agency declines to comment because of pending litigation.

Health Republic Insurance of Oregon, a co-op, filed the first lawsuit against the Obama administration over the risk corridor program in February. The nonprofit is seeking class-action status.

Highmark Inc. and Blue Cross and Blue Shield of North Carolina followed, filing their own individual lawsuits in May and June, respectively.

The insurers allege that the federal government violated the Affordable Care Act and the risk corridor payment obligations outlined in the health care law.

Though the Obama administration has signaled it would be willing to use the Judgment Fund to settle insurers lawsuits against the government, the nonpartisan Congressional Research Service issued two separate memorandums to Rubio and Barrasso on the legality of the use of the Judgment Fund.

In a memo sent to Rubio in January, the Congressional Research Service said the administration wouldn’t be able to use the Judgment Fund to award payments to insurers who filed suit.

Congress, the memo concluded, would have to appropriate additional funds for “any payment to satisfy a judgment secured by plaintiffs seeking recovery of amounts owed under the risk corridors program.”

“Consequently, it would be inappropriate for the Judgment Fund to be used to settle any litigation stemming from the risk corridor program,” the letter from Barrasso, Lee, Rubio, and Sasse continues.