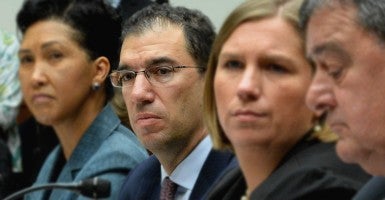 In October 2013, Andrew Slavitt (second from left) testified before the House Energy and Commerce Committee on Obamacare implementation failures. At the time, Slavitt was group executive vice president for Optum/QSSI. (Photo: Michael Reynolds/Newscom)

Andrew Slavitt, a former executive at the technology company tasked with saving HealthCare.gov and current second-in-command at the Centers for Medicare and Medicaid Services, was granted an ethics waiver by the Department of Health and Human Services to begin working with his former company immediately.

The waiver was granted despite Republican lawmakers’ concerns about Slavitt’s potential conflict of interest. The Daily Signal revealed those concerns in a story yesterday.

Slavitt, a former OptumInsight/QSSI group vice president, left the company last month to work as the principal deputy administrator at the Centers for Medicare and Medicaid Services, which runs Obamacare and HealthCare.gov. His post makes him the No. 2 at the agency under CMS Administrator Marilyn Tavenner.

According to the ethics waiver, issued July 11 by the Department of Health and Human Services and posted publicly last week, Slavitt will be able to begin working on matters involving his former company, OptumInsight/QSSI.

Without a waiver, Slavitt would have had to wait at least one year before participating in work that involves his former employer.

The letter states that Slavitt severed financial ties with OptumInsight/QSSI upon his hiring at CMS, and upon doing so will be “empowered to participate fully in particular matters of general applicability, such as regulation and policy determinations, that affect the healthcare-related industries in which your former employer operates.”

Slavitt is also able to participate in meetings with OptumInsight/QSSI personnel to discuss “technical issues or progress on existing contracts” and can “weigh in on or make decisions on policy matters or technical direction that would result in the necessity of [OptumInsight/QSSI] having to perform additional compensated work under existing contracts to implement health care reform under the ACA.”

>>> This Circuit Court’s Obamacare Decision Could Have Huge Consequences

In the waiver, Edgar Swindell, associate general counsel for ethics at HHS, praised Slavitt for his work in the health care industry. He wrote:

The information provided to me indicates that you bring an exceptional blend of managerial experience, health care industry acumen, and hands-on experience from working for the systems integrator for healthcare.gov, Optum.

It’s not a good idea to waive those kinds of potential conflicts of interest. This very case shows why it’s not a very good idea. … The person is going to have divided loyalties.

In a statement to The Daily Signal, Aaron Albright, spokesman for CMS, said:

Andy Slavitt has taken all appropriate steps, such as severing financial ties with his former employer, which allow him to execute his duties as principal deputy and participate in broad policy matters, including those affecting the health care industry. He will be recused, as appropriate, from participation in specific party matters, such as contracts or claims, involving his former employer. However, the terms of the limited waiver ensure that Andy will be able to continue to interact with all of the contractors as needed so the Marketplaces will be ready to enroll millions more Americans into quality, affordable coverage.

OptumInsight/QSSI is the sister company of UnitedHealthcare, which offers health insurance plans on a variety of state-run exchanges and plans to expand into the federal exchange run by HealthCare.gov. Both are owned by UnitedHealthGroup.

UnitedHealth purchased QSSI in September 2012. Before its acquisition, QSSI was tasked with building the federal data hub, which connects multiple government agencies to streamline verification of consumer information when Americans log into the federal and state exchanges and apply for Obamacare subsidies.

The company, now operating as OptumInsight/QSSI, was then tasked with saving HealthCare.gov after its disastrous implementation in October. HHS issued a new contract with OptumInsight/QSSI in January solidifying the tech company’s role as a “senior advisor.”

Neither CMS nor UnitedHealth responded to the senators’ inquiries.