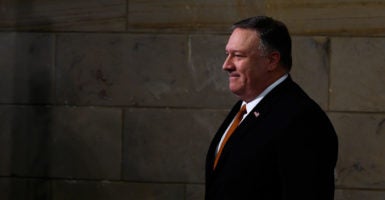 “America is a force for good in the Middle East,” said Secretary of State Mike Pompeo, pictured after speaking to students at the American University in Cairo on Jan. 10. (Photo: Andrew Caballero-Reynolds/AFP/Getty Images)

Secretary of State Mike Pompeo asserted Thursday that the United States will not abandon its leadership role in the Middle East, and that it won’t apologize for global leadership, in a sharp repudiation of the policies of the Obama administration.

“America is a force for good in the Middle East,” Pompeo said in an address before Egyptian officials, foreign diplomats, and students at the American University in Cairo. “We need to acknowledge that truth, because if we don’t, we make bad choices.”

“Remember: It was here, here in this very city, another American stood before you,” he said, referencing a 2009 speech by then-President Barack Obama.

The secretary delivered the remarks as the Trump administration is planning to withdraw U.S. troops from Syria.

“Let me be clear: America will not retreat until the terror fight is over,” Pompeo said. “We will labor tirelessly alongside you to defeat ISIS, al-Qaeda, and other jihadists that threaten our security and yours.

“President Trump has made the decision to bring our troops home from Syria. … Now is the time, but this isn’t a change of mission,” the secretary of state said. “We remain committed to the complete dismantling of ISIS—the ISIS threat—and the ongoing fight against radical Islamism in all of its forms.”

“But as President Trump has said, we’re looking to our partners to do more, and in this effort we will do so going forward together.”

He posed the question about what happens when the United States isn’t strong.

“For those who fret about the use of American power, remember this: America has always been, and always will be, a liberating force, not an occupying power,” Pompeo said.

“We’ve never dreamed of domination in the Middle East. Can you say the same about Iran? In World War II, American GIs helped free North Africa from Nazi occupation,” he said. “Fifty years later, we assembled a coalition to liberate Kuwait from Saddam Hussein. Would the Russians or Chinese come to your rescue in the same way, the way that we have?”

Pompeo said that the United States has learned from past mistakes—referencing that the Obama administration did nothing to hold Syrian dictator Bashar Assad accountable for his abuses.

“When Bashar Assad unleashed terror upon ordinary Syrians and barrel-bombed civilians with sarin gas, a true echo of Saddam Hussein’s gassing of the Kurdish people, we condemned his actions. But in our hesitation to wield power, we did nothing,” he said.

So today, what did we learn from all of this? We learned that when America retreats, chaos often follows. When we neglect our friends, resentment builds. And when we partner with enemies, they advance.

The good news is this: The age of self-inflicted American shame is over, and so are the policies that produced so much needless suffering.

Now comes the real new beginning. In just 24 months, actually less than two years, the United States under President Trump has reasserted its traditional role as a force for good in this region.

We’ve learned from our mistakes. We’ve rediscovered our voice. We’ve rebuilt our relationships. We’ve rejected false overtures from our enemies.