Why Quick Repeal of Obamacare Should Come Before Replacement 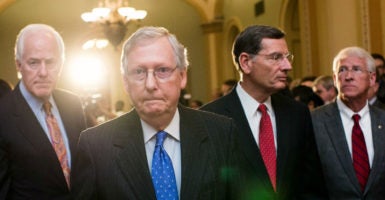 When it comes to Obamacare, the buzzwords on Capitol Hill this week have been “repeal” and “replace.” As for the timing of which happens when, well, it depends on who you ask.

Senate Majority Leader Mitch McConnell has said replace will follow “soon after” repeal. At The Heritage Foundation, we have echoed that plan. However, Sen. Bob Corker, R-Tenn., and a handful of other senators have argued that repeal and replace should happen “simultaneously.”

While these senators are surely well meaning, they should know that their statements are threatening Congress’ attempts to repeal Obamacare at all.

Reconciliation is a powerful—but tricky—tool to use, as it allows Senate majorities to overcome the filibuster and pass major legislation with only 51 votes in the Senate (as opposed to the usual 60). In 2010, Democrats used it to pass parts of Obamacare over Republican objections. Now, Senate Republicans want to use it for repeal.

What makes reconciliation so tricky, however, are the very specific rules that govern its use. According to these rules, reconciliation bills must only contain subject matter that has a direct budgetary impact. Otherwise the reconciliation bill “loses privilege,” or loses the ability to avoid the filibuster.

Those who want to combine repeal and replace would do well to remember this key feature of reconciliation. Because of its strict rules, it is highly unlikely that a full or even partial replacement would be allowed under the reconciliation process, and even if it was, the rules would so severely limit the content that the policy outcome would suffer.

That means that under a simultaneous repeal-and-replace effort, 60 votes would be required to repeal Obamacare, instead of 51—an impossibility, as Republicans only have 52 votes in the Senate.

Advocating simultaneous repeal and replace in the same legislative vehicle jeopardizes the entire repeal effort by threatening the integrity of the reconciliation process. If Republicans choose this route, they risk never repealing Obamacare at all.

Instead, they should focus on passing a repeal bill via the reconciliation process, similar to what they passed in 2015 (which almost every Republican senator voted for). That bill contains a two-year phaseout of significant parts of Obamacare, which will allow Republicans to discuss, debate, and deliberate on what a replace plan should look like.

As my colleague James Wallner has pointed out, Republicans cannot make the same mistake Democrats did in 2009. They cannot write a giant replace bill in secret, and jam it through on a party-line vote without anyone truly knowing the details. (Remember Nancy Pelosi’s famous comment, “We have to pass the bill so that you can find out what is in it”?)

The replace process must not be rushed. Rather, it should be done transparently, with committee hearings, full debate, and an open amendment process. Members of Congress and the American people should know the details of what’s being proposed, and have time to study the ramifications before critical decisions are made.

Obamacare is crumbling, and the health insurance market in America needs significant reform. Republicans have put forward a myriad of proposals to do so. However, responsible lawmaking requires this process to be done in the light of day, with participation by all members of Congress, and with buy-in from the American people.

Republicans received a mandate from voters to repeal Obamacare, and to fix the country’s health care system. Fulfilling this promise requires lawmakers to treat the repeal effort with the utmost care. That means using the reconciliation process for repeal only, and then moving forward with the open debate and deliberation that such critical policy decisions deserve.