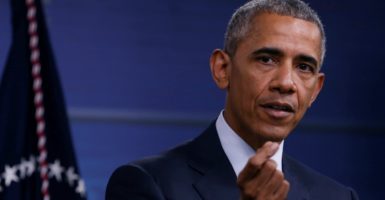 The trickle of disturbing leaks about the Obama administration’s flawed and risky Iran policy continues to grow.  The Wall Street Journal reported Thursday that “New details of the $400 million U.S. payment to Iran earlier this year depict a tightly scripted exchange specifically timed to the release of several American prisoners held in Iran.”

Although President Barack Obama’s White House persistently has denied that the cash transfer amounted to a ransom payment, a State Department spokesman admitted Thursday that the U.S. government delayed making the payment “to retain maximum leverage” over Iran.

When the administration announced in January that the hostages had been released, it also announced that it had agreed to pay Tehran $1.7 billion to settle a longstanding claim at the U.S.-Iran claims tribunal, which was set up under the 1981 Algiers Accords that resolved the first Iran hostage crisis. But the White House insisted that the payment was made as part of the agreement that resolved the 1979-1981 Iran hostage crisis, not the latest hostage deal.

The January hostage deal involved the release of four innocent Americans held on trumped-up charges in exchange for seven Iranians justifiably imprisoned or charged with sanctions violations and the dropping of criminal charges against another 14 Iranians arrested outside the United States for various offenses.

Such criminals-for-hostages swaps reward hostage taking and the deal was criticized for that reason when the hostages were released on Jan. 17, the day after the “Implementation Day” of the Iran nuclear agreement.

But subsequent revelations have put the prisoner exchange in an even worse light.

The Wall Street Journal reported on Aug. 3 that $400 million worth of cash was transferred to Iran on the same day the hostages were released, at the request of the Iranian officials involved in the hostage negotiations who “said they wanted the cash to show that they had gained something tangible.”

Senior Justice Department officials had objected to sending the cash at the same time as the hostage release, but their objections were overruled by the State Department.

Clearly, Iranian officials consider the cash payment to be a hostage ransom.  The commander of the Basij, a volunteer force affiliated with the Islamic Revolutionary Guard Corps, gloated in January that the United States had bought the freedom of the American prisoners with the payment.

The Tehran regime has arrested at least six more foreign visitors since the payment was made in January, including Reza Shahini, a dual Iranian-American citizen, and Nizar Zakka, a Lebanese national with U.S. permanent residency.

Siamak Namazi, an Iranian-American businessman based in Dubai, was arrested in October while visiting a friend in Tehran.

Even more disturbing is the case of Robert Levinson, a retired FBI agent who disappeared in Iran in 2007. Levinson went missing after interviewing David Belfield, an American convert to Islam who fled to Iran after he assassinated an exiled Iranian opposition leader, Ali Akbar Tabatabai, in 1980 in Bethesda, Maryland.

Clearly, Tehran has concluded that crime does pay.

The Obama administration’s hostage deal is a dangerous precedent that puts more Americans at risk of being targeted by Iran and its terrorist surrogates to extract ransom payments in the future.

This is part of the hazardous legacy that Obama will leave for the next president.