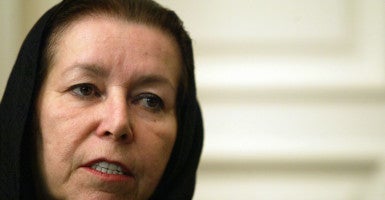 A 2007 photo of Christine Levinson, the wife of former FBI agent Robert Levinson, who has still not been returned. (Photo: Mohammad Kheirkhah/UPI/Newscom)

The arrival of Implementation Day triggered celebrations in Tehran. And well it should. Iran is now set to cash in, gaining access to an estimated $50 billion immediately and eventually pocketing up to one hundred billion dollars more in frozen assets as sanctions are lifted.

The economic bonanza will help revive Iran’s faltering economy and tilt the regional balance of power in Tehran’s favor, as the money is invested in Iran’s ongoing military buildup, its ballistic missile program, terrorist surrogates, and even its nuclear program, which has been slowed but not halted.

To make matters worse, the administration also opted to directly pay Tehran $1.7 billion to settle a longstanding claim at the U.S.-Iran claims tribunal, which was set up under the 1981 Algiers Accords that resolved the first Iran hostage crisis. Apparently crime does pay.

The nuclear deal does a much better job of dismantling sanctions on Iran than it does of dismantling Iran’s nuclear infrastructure. Although Iran was required to ship much of its enriched uranium out of the country, redesign its heavy water reactor that could have given it a path to a plutonium bomb, and put thousands of centrifuges in storage, none of its uranium enrichment facilities were required to be dismantled.

After restrictions on the number of centrifuges and uranium enrichment levels are eased in ten to fifteen years, Tehran will be in a position to scale up its nuclear program and position itself for a final sprint to a nuclear weapon.

Or if it is less patient, it could covertly violate its nuclear commitments much earlier, as it has frequently done in the past.

The hostage deal, which the administration claims was negotiated separately from the nuclear deal, involved the release of Iranians justifiably imprisoned or charged with sanctions violations, including one who helped Iran launch its first satellite, for Iranian-Americans jailed on trumped up charges. Three of the Iranian surrogates awaiting trial received rare pre-trial pardons. The administration also dropped charges against another 14 Iranians arrested outside the United States for various offenses.

This swap of prisoners for hostages rewards Iran’s dictatorship for hostage-taking and is sure to encourage it to seize more hostages.

Moreover, it acquiesces to Iran’s imposed moral equivalency of trading convicted Iranian criminals for innocent Americans unjustly held as bargaining chips. It is reminiscent of the Alan Gross case, in which the Obama administration traded several convicted Cuban spies to the Castro regime for the release of an imprisoned U.S. aid worker.

This delay sets a dangerous precedent in which Iran can exploit hostages to delay or dilute sanctions on other issues. It also sets up the next standoff with Tehran, which has threatened to accelerate its ballistic missile program if sanctions are applied.

Then there is the matter of the two American hostages who were not released and are sure to be used as leverage by Tehran in future disputes.

Siamak Namazi, an Iranian-American businessman based in Dubai, was arrested in October while visiting a friend in Tehran. Even more disturbing is the case of Robert Levinson, a retired FBI agent who disappeared in Iran in 2007. Levinson went missing after interviewing David Belfield, an American convert to Islam who fled to Iran after he assassinated an exiled Iranian opposition leader, Ali Akbar Tabatabai, in 1980 in Bethesda, Md.

The internal security organs holding these two hostages report to the same hardline leaders who control Iran’s Revolutionary Guards, ballistic missile force, and nuclear program. In recent months they have staged a series of provocations, including two ballistic missile tests that violate U.N. Security Council resolutions, harassment of U.S. Navy ships in the Persian Gulf, and the humiliation of 10 American sailors on two boats that inadvertently navigated too close to an Iranian island.

Those sailors were released relatively quickly but never should have been arrested in the first place. Iran had more than one hundred billion dollars’ worth of reasons to release them, but after Implementation Day, American leverage will steadily decline as Iran repatriates its frozen assets.

U.S. Must Be Vigilant

The U.S. must vigilantly monitor Iranian compliance with its nuclear commitments in the future and vigorously enforce the remaining sanctions on Iranian officials or entities that are engaged in terrorism, ballistic missile operations or human rights violations.

Washington must also push back against Iran’s hostile policies, including interventions in Syria and Yemen, to make it clear that the nuclear agreement does not give Tehran a free pass to establish hegemony over the region.

The temporary nature of the most critical restrictions on Iran’s uranium enrichment program makes sense only if the nuclear deal is transformational for Iran’s radical Islamist regime. But the hostage deal that not so coincidentally emerged on Implementation Day makes it clear that Tehran has not changed and still exploits hostages to advance its interests.

Although the return of Americans unjustly imprisoned in Iran is welcome, it is unsettling to consider the long-term foreign policy costs of meeting Iran’s hostage ransom demands.

It also is cold comfort to know that Implementation Day means that the administration now has an unsigned, legally non-binding agreement in principle with a ruthless regime that has no principles, except to protect and export its Islamist revolution.

See also: Why Is Obama Administration Siding With Iran Over Congress?