Why Have So Many Americans Dropped Out of the Workforce in the Obama Years? 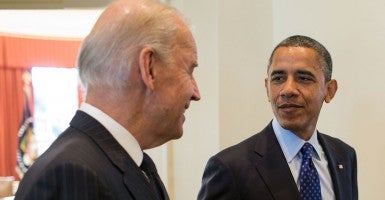 President Obama declared during a recent speech at Northwestern University that he has turned the economy around and that while he might not be on the ballot in November midterm elections, his “agenda will be.”  Democrats across the country cringed when they heard that one.  Right now Michelle is a lot more popular than he is on the campaign trail – much like Laura Bush was more in demand than George W. in his final years as president.

To be sure, there is some good news on the economic front.  Employers are really starting to hire again.  We got a very good employment report on Friday when it comes to jobs created.  The economy picked up 248,000 new hires in September and another upward revision for July and August brings the total to more than 300,000. GDP was bumped on in the second quarter of 2014 to 4.6% after a negative first quarter.

It’s a hopeful sign that the economy may be revving up for a higher gear – and finally we may be pulling out of this 2% subpar growth rut of the last five and a half years.

But then there is the not so good news that still plagues the economy  and it is a familiar one: the disappearing American worker.  Amazingly, nearly 100,000 more Americans on net dropped out of the labor force in September. Some of this is due to natural retirement of baby boomers, but a lot of it is due to workers just giving up finding the job they want.  Labor force participation is actually rising for older workers and falling for younger workers.

Here is the stunning statistic on the economy that tells the whole story about why we aren’t growing faster. Since Barack Obama entered the Oval Office in January of 2009,the percentage of the working age population actually part of the labor force (either working or looking for work) has plummeted by 3 percentage points – to 62.7%. Not since early 1978 has such a low proportion of the working-age population been in the labor force. In effect, the labor force is 7.4 million smaller than it otherwise would have been  had people either not stopped looking for work or, particularly with the case of younger Americans, simply failed to  start looking for work. In effect, nearly as many Americans have either  left the work force – or never entered —  in this recovery than have found a job.

That’s a very distressing trend.  It also explains the big dive in the official unemployment rate to 5.9%. Unemployment keeps going down as more Americans give up looking for a job.

Here’s another trouble spot: the jobs that the economy is creating now aren’t the same caliber jobs that were lose during the recession of 2008 and 2009.  Workers who got laid off are increasingly having to settle for lower wage jobs in retail, food services, or leisure and hospitality.  This may explain why President Obama and his allies on the left are able to point to McDonald’s workers who are the head of a household.  If it’s true that mothers and fathers are having to work as burger flippers, that’s not an argument for raising the minimum wage. It’s asad indictment of this recovery.

In September, worker wage and salaries were flat. Over the last year average private sector hourly earnings are up just 2%.  That’s slightly above the inflation rate of 1.7%, but from the time for the last five years the price of middle class items like meat, energy, transportation, college tuition, and hospital care have been rising at 4 or greater.  So workers are feeling a financial squeeze.  When President Obama boasts that nearly every economic statistic is better now than when he entered office, that sounds like a laughable claim to many Americans, because the statistic they care most about – their paycheck – is shrinking.