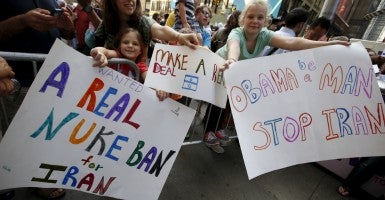 The Associated Press released a bombshell report on Wednesday that revealed that Iran will be allowed to use its own inspectors to investigate a military site where it is suspected of conducting nuclear weapons work, under the terms of a secret agreement it signed with the International Atomic Energy Agency (IAEA).

Although some supporters of the Iran nuclear deal sought to discredit the initial Associated Press report, the news organization stands by its reporting and the Obama administration has not denied the story.

This unprecedented arrangement, which would involve Iranian personnel providing photos, videos, and environmental samples from the Parchin military complex to the IAEA, has stoked concerns that the IAEA investigation of Iran’s past work on developing nuclear warheads will amount to little more than a public relations exercise.

The IAEA, as well as intelligence agencies from the U.S. and other countries, long have suspected that Iranian scientists experimented with high-explosive detonators for nuclear arms at Parchin and conducted additional weapons-related work at other sites.

Despite repeated promises to fully cooperate with the IAEA’s investigation, Iran has blocked IAEA inspectors from looking at the Parchin facilities and has razed buildings and stripped away large quantities of earth, further fueling suspicions that Tehran is concealing evidence of past nuclear weapons work.

The IAEA investigation, which began long before the nuclear agreement was signed in July, has become a crucial part of the deal because the accord stipulates that sanctions can only be lifted after Iran resolves the IAEA’s concerns over the “possible military dimensions” of its nuclear program.

The IAEA’s absurd arrangement with Iran is a far cry from “anytime/anywhere” inspections promised by the Obama administration.

The disturbing news that the IAEA has agreed to outsource some of its responsibilities to Iran has amplified concerns that questions about Iran’s past efforts to develop nuclear warheads will be swept under the rug in a rush to lift sanctions.

Fred Fleitz, who has worked on Iranian nuclear issues at the CIA, State Department, and House Intelligence Committee during a distinguished 25-year government career, has condemned the IAEA’s side deal as a “preposterous and unserious plan to investigate past and ongoing Iranian nuclear-weapons-related activities.”

The IAEA’s absurd arrangement with Iran is a far cry from “anytime/anywhere” inspections promised by the Obama administration. The final agreement reached at Vienna allows Iran to delay inspections for up to 24 days, and possibly a lot longer if the U.N. Security Council gets involved in deliberations over possible Iranian efforts to delay inspections.

Charles Duelfer, who oversaw inspections of Iraq’s weapons of mass destruction programs as a top official of the United Nations Special Commission on Iraq (UNSCOM) from 1993 to 2000, has noted that Iran is likely to apply the lessons learned by Saddam Hussein’s regime in obstructing and thwarting U.N. inspectors.

The disclosure of the IAEA secret agreement has ignited a firestorm on Capitol Hill, where many members already resented that they were being kept in the dark on important aspects of the Iran nuclear agreement. On Wednesday, Sens. Mark Kirk, R-Ill., and Marco Rubio, R-Fla., called for the Obama administration to release secret letters to foreign governments assuring them that they will not be legally penalized for doing business with the Iranian government.

Congress should not be finding out about the details of a secret side agreement with Iran through media reports. The House has already demanded that the administration give Congress the text of these agreements, as is required by the Iran Nuclear Agreement Review Act that the president signed into law. On its face, this agreement seems to give Iran much too much authority in determining how and when inspections happen at the Parchin military site. Though President Obama claimed that this agreement is not based on trust but on verification, this side deal makes it look like the exact opposite.

Allowing Iran to assume such a prominent role in investigating itself would amount to putting the fox in charge of the chicken coop.