Single-Payer Health Care: The More Coloradans Knew, the Less They Liked It 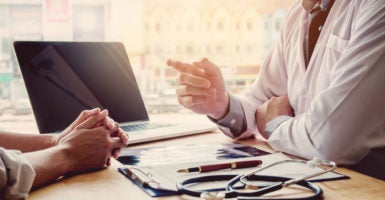 After an extensive campaign, nearly 4 out of 5 Coloradans voted to reject ColoradoCare. (Photo: SarinYapinngam/Getty Images)

Linda Gorman directs the Independence Institute’s Health Care Policy Center, which is based in Denver, Colorado.

Those leading the charge for single-payer health care claim to enjoy wide support among voters.

In 2016, they put that claim to the test in Colorado, asking voters to amend the state constitution to create ColoradoCare, a single-payer bureaucracy designed to “administer a coordinated payment system for health care services and control the per capita cost of health care.”

The more voters learned about the plan, the less they liked it.

The ColoradoCare campaign sought to deflect criticism by providing few details about the plan. It wrote the proposed amendment in the vaguest possible language. Fortunately, it still had to provide some specifics outlining the plan’s legal structure—and when it did, support plummeted.

ColoradoCare would have contracted with providers to purchase health care services for state residents. Under the law, no licensed health care provider would have been able to require patients to make copayments, or any other payments, for medical devices or services without ColoradoCare approval.

As the only entity able to legally pay for health services, ColoradoCare would have set prices for every health care service in Colorado.

Thanks to Obamacare, almost a quarter of Colorado’s population was already on Medicaid by 2016. Hospitals and physicians had long campaigned for increases in Medicaid reimbursements, so many Coloradans knew that Colorado Medicaid’s single-payer plan paid less for care than the private sector. They had been repeatedly told that low reimbursements made it difficult for Medicaid patients to get the care they needed. As ColoradoCare would have been a political entity, opponents explained why its reimbursements would mimic Medicaid’s.

Questions like “How quickly will underpaid physicians leave the state for greener pastures, or simply leave medicine altogether?” were common. ColoradoCare’s proponents assured audiences that this could never happen.

But opponents pointed to Colorado Medicaid’s existing shortage of specialists. They also pointed to Great Britain, noting that a third of its National Health Service Accident & Emergency doctors had left the country due to the understaffing and overwork prevalent in that single-payer system.

Though supporters of ColoradoCare said it would provide excellent health care, voters could see that the amendment’s actual language directed the state to “control the per capita cost of health care.”

Voters already harbored doubts about government’s commitment to quality health care. The Department of Veterans Affairs scandals were in full swing. News reports detailed patient deaths, hidden waiting lists, and incompetent staff. Many people knew others who had been denied care in Canada and Britain. Even they were surprised when opponents showed how extensive the denials really were.

ColoradoCare opponents also detailed why outlawing private care would make it impossible to monitor the quality of care. Without private care, there would be nothing to compare public care to.

Opponents also showed why the most seriously ill were likely to suffer the most. Politically controlled health systems generally cater to healthy voters. The people who run them quickly learn that the easiest way to control per capita costs is to deny innovative treatment to the 2 or 3 percent of people stricken with expensive health conditions.

At the time, the local news was detailing the billion-plus dollar cost overrun at the new VA hospital being constructed in Aurora, Colorado. It was hard to make a convincing case that a new bureaucracy run by politicians who could not be recalled, and who were exempt from standard government checks and balances, would be any better at reducing costs than the VA.

Then there were the finances. Hiking Colorado’s non-payroll income tax from 4.63 percent to 14.63 percent, and applying a new 10 percent payroll tax to wages and tips, would provide ColoradoCare’s initial funding. Independent analysts predicted a small first year deficit, one that would grow to $8 billion a year in a decade and require more provider reimbursement cuts, more denial of care, and higher taxes.

Worse, though the amendment restricted treatment to Colorado residents, all one has to do to be a resident is declare an intention to reside in the state. Voters were unenthusiastic about potentially making Colorado a health care provider to the world.

Obamacare’s failure to deliver on its many promises has kept health care a top concern of voters. Like ColoradoCare supporters, politicians now selling “Medicare for All” are making promises they know they can’t keep.

Colorado voters took the time to see through the empty promises of single-payer health care. Other Americans should join them in asking the tough questions. Support for single payer plummets when thoughtful voters learn the facts.