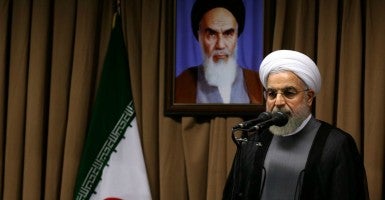 The Obama administration’s nuclear agreement with Iran has major flaws that could dangerously undermine the long-term national security interests of the United States and its allies.

Although the administration entered the negotiations pledging to cut off all pathways to a nuclear weapon, the agreement amounts to little more than a diplomatic speed bump that will delay, but not permanently halt, Iran’s drive for a nuclear weapons capability.

The agreement in effect legitimizes Iran as a nuclear threshold state.

Once key restrictions on uranium enrichment expire in 10 to 15 years, Iran will have the option to develop an industrial scale enrichment program that will make it easier for it to sprint cross that threshold.

Iran used red lines and deadlines to wear down the administration, which played a strong hand weakly.

The administration undermined its own bargaining position by making it clear that it wanted a nuclear agreement more than Tehran seems to have wanted one, despite the fact that Tehran needed an agreement more for economic reasons.

The administration’s downplaying of the military option and front-loading of sanctions relief early in the negotiations reduced Iranian incentives to make concessions.

This gave the Iranians bargaining leverage they have used shrewdly.

Iran’s nuclear infrastructure is left largely intact. Centrifuges will be mothballed but not dismantled.

Iran’s illicit nuclear facilities Natanz and Fordow, whose operations were supposed to be shut down under multiple U.N. Security Council resolutions, have now been legitimized, despite the fact that they were built covertly in violation of the Nuclear Non-proliferation Treaty.

Iran is essentially rewarded for cheating under the agreement.

It gained a better deal on uranium enrichment than Washington has offered to its own allies.

Instead of dismantling Iran’s nuclear infrastructure, the agreement dismantles the sanctions that brought Tehran to the negotiating table in the first place.

This fact is not lost on our allies, friends and “frenemies” in the region.

Sunni Arab states threatened by Iran are likely to hedge their bets and take out insurance by working to expand their own nuclear options.

Saudi Arabia already has let it be known that it will demand the same concessions on uranium enrichment that Iran received.

The Saudis have begun negotiations to buy French nuclear reactors and this civilian program could become the foundation for a weapons program down the line.

Other Arab states and Turkey are likely to tee up their own nuclear programs as a prudent counterweight to offset to Iran’s expanding nuclear potential, after some of the restrictions on its uranium enrichment program automatically sunset.

>>> Commentary:  Here’s the Truth About 6 of Obama’s Iran Deal Claims

The end result could be accelerated nuclear proliferation and a possible nuclear arms race in the most volatile region in the world.

Another major problem is verification of Iranian compliance.

The administration’s initial insistence on “anytime/anywhere” inspections was downgraded to “sometimes/some places.”

Iran has up to 14 days to weigh the requests of International Atomic Energy Agency inspectors. If it decides to object, its objections would be relayed to an arbitration committee that would have 7 days to rule. If it rules against Iran, Tehran would have another 3 days to arrange an inspection.

This gives Iran up to 24 days to move, hide or destroy materials sought by inspectors. This is far from a foolproof system, particularly in light of Iran’s long history of cheating.

Sanctions relief is another potential headache. Tehran would benefit by the release of about $150 billion of its money frozen in overseas accounts.

Ultimately the Iranian economy would be boosted by tens of billions of dollars more through a surge of oil revenues as oil sanctions are lifted.

This could help Iran reshape the regional balance of power and establish hegemony over Iraq, Yemen, important oil resources and oil supply routes.

Much of this money will go to fund the Assad regime, Hezbollah, Yemeni Houthi rebels, Hamas, Palestinian Islamic Jihad and other terrorist groups funded by Iran.

This would rapidly lead to escalation of the wars, shadow wars and civil wars already taking place around the Middle East.

The dangers posed by Iran’s enhanced ability to finance global terrorism would be compounded by the administration’s last minute capitulation on the U.N. arms embargo, which will be gradually eased if Iran remains in compliance with the agreement.

This would allow Iran to upgrade its conventional weapons through imports from foreign suppliers and enable it to more easily arm its foreign allies and surrogates.

The bottom line is that the Obama administration now has signed an agreement that will expand Iran’s power and influence, strain U.S. relations with its regional friends, weaken long-standing non-proliferation goals on restricting access to sensitive nuclear technologies and contribute to the evolution of a multi-polar nuclear Middle East.