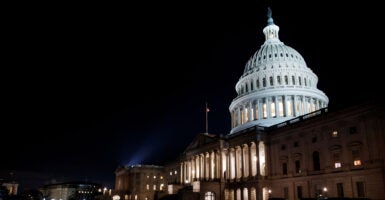 While there’s a place for foreign assistance in federal spending, critics of Congress say, that place is not in a COVID-19 relief bill. (Photo: Ting Shen/ Xinhua/Getty Images)

Many are upset about Congress sticking foreign aid and other international affairs items in omnibus spending along with the COVID-19 relief bill. They are right to be upset.

Whether Washington is crafting COVID-19 relief right is a worthy debate in itself, but the issue of all the spending tacked onto the bill also merits attention.

There certainly is no reason for spending on international programs to be part of that package.

That said, there is absolutely a place for foreign assistance in federal spending. The U.S. is a global power with global interests and global responsibilities. To look after Americans and their interests, sometimes it makes good sense to spend money over there, for the benefit of folks back home.

A good example of that is investment in the Three Seas Initiative. Not only will that help allies, in the end, the U.S. will actually turn a profit from our investments.

Another example: The Trump administration implemented a strong program in support of women in other countries, addressing issues such as property rights and rule-of-law reform, initiatives that will help those nations and make them better partners for the U.S.

These programs are realistic, with concrete deliverables promoting the values that Americans cherish, and they track right back to supporting American policy objectives that further U.S. interests.

But Americans are right to ask: “What the heck is this stuff doing in a COVID-19 relief bill?”

That kind of spending ought to proceed through regular order. Initiatives ought to be debated, explained, and defended so there’s some transparency and accountability to the process.

When they are crammed into a massive bill that lawmakers don’t even get to read, there’s no assurance to the American people that the spending makes sense.

Further, Americans have a right—and ought—to know more about their nation’s foreign policies and how spending benefits them. When it’s just money crammed into a suitcase and shipped overseas, Washington has failed in its fundamental responsibility to educate and explain.

Such behavior undermines support for American policies. Shame on Washington. Denying Americans knowledge and insight into their nation’s policies and actions overseas is just plain wrong.

Foreign policy is too important to be treated like special-interest spending stuffed into a bill at midnight.