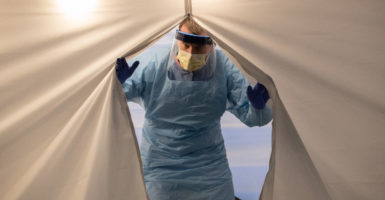 A nurse wearing protective clothing emerges from a tent at a coronavirus testing center at the University of Washington Medical Center March 13, 2020, in Seattle, Washington. UW Medical staff feeling potential symptoms of COVID-19 were asked to pass through a drive-thru screening center on campus for testing. (Photo: John Moore/Getty Images)

We all like our facts simple. One of the data points that many want to know is the mortality rate for the COVID-19 illness so they can make informed risk decisions.

Unfortunately, like so many other things in life, it’s complicated.

Even though it seems like the novel coronavirus that causes the disease health officials call COVID-19 has now been around for a while, it has only just arrived on the scene. Thus, scientists are only now starting to gain some early insights.

But you would be wrong. For although the reported deaths from COVID-19 are probably reasonably accurate, the number of reported cases are likely dramatically underreported.

Shortages of tests, incomplete reporting, or people who are only lightly symptomatic or completely asymptomatic make the actual number of cases likely much higher. What happens if you increase the denominator (the reported cases) in this equation? The mortality rate goes down.

Second, calculating the mortality rate in this way ignores the factor of time. Some of the reported cases may have been just diagnosed. What will be their ultimate outcome? Only time will tell.

The only way to be precise would be to base your calculations on the number of people who either died or fully recovered. Today, we are far from fully knowing those numbers, even in places like Wuhan, China, where the infection started.

The best places to get good data for mortality—or more technically, “case fatality rate” data—are from populations where the reported number of cases is highly reliable, more so than what was coming from Hubei province, China, where early on the health care system was overloaded, and they weren’t able to focus on keeping accurate records.

But, unfortunately, it’s still more complicated, because the case fatality rate for COVID-19 is highly dependent on two other important factors: the health and age of the patients who contract the disease and the medical treatment they receive while ill.

Just like owning a pair of shoes with the average shoe size (10.5 for men in the U.S.), an overall “average” case fatality rate is really not that useful. It is much more informative to understand the rate for a specific population under particular conditions.

By now, we all know that COVID-19 is more serious for older individuals and those with certain health conditions. Findings based on early data from China suggest that case fatality rates for people with the infection ages 60 to 69 was 3.6%; ages 70 to 79 was 8%; and for those older than 80 it was 14.8%.

On average, patients who did not have any underlying medical conditions had an overall case fatality rate of 0.9%, but for those with certain medical issues, the rates were significantly higher: 10.5% for those with cardiovascular disease; 7% for diabetes; and 6% each for chronic respiratory disease, hypertension, and cancer.

All of this data should be taken with a grain of salt, however.  It’s early, and there is still much to be learned, but it gives you a sense of how the case fatality rate can vary dramatically.

Finally, in addition to having accurate data on ages and health conditions, an accurate rate changes based on the level of treatment provided to those sick.

Although there’s currently no cure for COVID-19, the disease can be treated with techniques like high-flow oxygen therapy, mechanical ventilation, and infection-prevention practices.

Areas where those treatments are not available or are overcome by patients will experience a higher case fatality rate.

One study recently published by the Centers for Disease Control and Prevention estimated an overall case fatality rate for COVID-19 of between 0.25% and 3.0%, with the upper range likely to be found in situations where hospital and intensive care facilities are “constrained.”

What can we take away from this discussion? Several things: One is that our understanding of the disease and the associated case fatality rate is changing daily.

But if nothing else, another is to be an informed consumer of information. When you hear a COVID-19 case fatality rate being tossed around, ask more questions. Ask where the data come from, for what age group, in what state of health were the patients previously, and finally, what sort of medical treatment did the group receive?

Only then will you perhaps be able to form your own useful judgment.