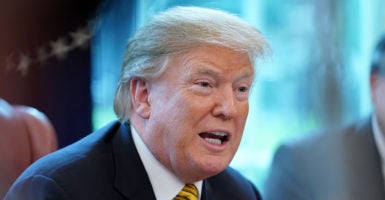 You may not hear much in the media about it, but the Trump administration just announced a new initiative to support efforts to empower women worldwide.

It’s yet another example of how “America First” means advancing what matters to America.

In this case, it means “protecting the United States and promoting global peace and stability by enhancing women’s leadership in efforts to prevent conflict, stem terrorism, and promote security around the world,” the administration said of the program, which helps empower women to deal with peace, security, and disaster response issues.

It means acknowledging that “women provide essential contributions to forging lasting solutions to conflict, terrorism, and crisis—yet their perspectives and leadership are too often untapped.”

It means recognizing empirical research and real-life examples prove that populations in which women are empowered can better resolve conflict and overcome disasters.

For example, women in Colombia, with help from the U.S. and other international partners, have helped transform their nation from one mired in chronic war to a people with a future.

That hardly squares with the caricature of Trump’s policy of “America first,” and it doesn’t mean the president has been given over to political correctness.

What it means is he has taken a hard look at how to help America compete in a hyper-competitive world and begun to implement some forward-thinking ideas.

America First means the president’s first and foremost job is to project the vital interests of all Americans. It doesn’t mean America eschews friends and allies. In fact, it means enlisting their help in common cause when we battle common enemies and problems.

Here, the challenge is to help build the capacity of friends and allies to be good partners for the United States. That is just good foreign policy and a good fit for Trump.

This is not a typical do-gooder initiative. It’s not about showing “empathy,” which progressives believe to be the most important thing. It’s not a feel-good measure.

It’s a data-driven, cold-eyed, realistic approach that makes just as much sense to American security as helping build foreign militaries so nations can defend themselves and join in the common defense.

In many struggling states, women are both the most vulnerable populations and the most underutilized human capital. Programs that take on these problems are essential.

There are some ground rules to get this right.

Good programs offer a hand up, not a handout. They aren’t there to enrich bureaucrats and nongovernmental organizations. They are a catalyst for growth, not global welfare.

Good programs do not push partisan agendas. They enable basic human freedoms, such as preventing sexual abuse and exploitation and ending human trafficking and violence against women.

Good programs target meaningful and cost-effective measures that serve the common interests of the U.S. and the host nation.

Trump’s intentions are right, and this strategy seems appropriate. Washington may not yet be used to doing things Trump’s way, but his defense strategy has been largely successful and his instincts on what puts America first have been good.

We’ll need to watch to make sure the program stays on track, but it will if it follows the blueprint.