Empowering Women by Advancing Economic Freedom Around the World 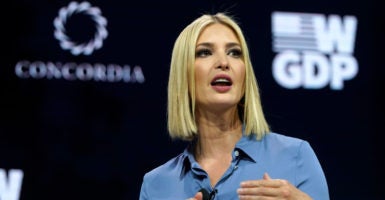 Ivanka Trump speaks onstage Monday during the first day of the Concordia Annual Summit at Grand Hyatt New York. The summit bills itself as "the largest and most inclusive nonpartisan forum alongside the United Nations General Assembly." (Photo: Riccardo Savi/Getty Images)

The Trump White House has been pushing Ivanka Trump’s brainchild, the Women’s Global Development and Prosperity Initiative, to a greater global audience.

The program, which involves the National Security Council, the State Department, and other relevant agencies, focuses on empowering women and seeks to support them in the workplace in developing and Third World countries.

How? By helping these women succeed as entrepreneurs and advancing legal reforms that will create greater gender equality.

Ivanka Trump, of course, was a successful businesswoman before becoming a senior adviser to her father as president, working in the White House without pay.

The ultimate goal of the Women’s Global Development and Prosperity Initiative, known as WGDP, is to help 50 million women improve their economic conditions by 2025.

The Trump administration has a unique opportunity to use U.S. aid effectively to encourage entrepreneurship, push private enterprise, and increase innovation while focusing on comparative advantage. Promoting economic freedom in developing or repressed countries is a crucial pillar of an “America First” agenda that not only will advance U.S. interests but cement foundations of free-market principles and defend democratic values.

By using U.S. economic diplomacy in this way, America has practical opportunities to help women become agents of change in their home countries.

According to The Heritage Foundation’s Index of Economic Freedom, liberalized economies not only have higher levels of entrepreneurial dynamism, higher standards of living, lower rates of poverty, and safer environmental standards, but also greater democratic governance, more social progress, and more gender equality.

Good programs offer a hand up, not a handout. They aren’t there to enrich bureaucrats and nongovernmental organizations. They are a catalyst for growth, not global welfare. … Good programs target meaningful and cost-effective measures that serve the common interests of the U.S. and the host nation.

When women are empowered with more and greater opportunities as workers, innovators, entrepreneurs, and investors, communities flourish and economies expand. True empowerment is allowing individuals around the world to engage autonomously in transactions as an exercise of their political and economic rights.

The constraints on economic empowerment for women are complex. However, women’s advancement and empowerment do not necessitate gender quotas or affirmative action.

What’s needed, above all else, are free-market policies that allow women to make their own choices.

As outlined in the presidential memorandum on promoting women’s global development and prosperity, “accelerating women’s economic empowerment around the world is integral to enabling developing countries to achieve economic self-reliance and to become greater trading partners with the United States.”

As The Heritage Foundation’s Index of Economic Freedom has documented, countries that implement free-market policies enable women to make their own economic decisions.

The first daughter’s Women’s Global Development and Prosperity Initiative can be an important tool in helping make that happen.