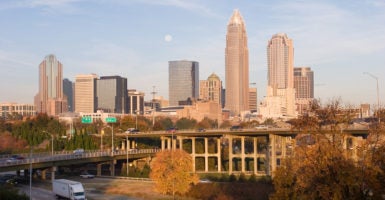 A hammer and sickle was spray painted across a World War II memorial in Charlotte, North Carolina, in red and yellow over the weekend. Pictured: the uptown Charlotte skyline. (Photo: Skyhobo/Getty Images)

A communist symbol was reportedly spray painted on a World War II memorial in Charlotte, North Carolina, over the weekend.

A hammer and sickle was emblazoned across the stone monument in red and yellow, as well as the words “Glory to the day of heroism June 19, 1986,” according to Fox News. Both are references to communist ideology.

Vandals also painted over the description of the monument, which said it honored those “who made the supreme sacrifice.” The 20-foot-tall relic is dedicated to 500 men who were killed in World War II, Fox reported.

U.S. Air Force veteran Wayne White reportedly took the day off from work Monday, formed a group of volunteers, and began cleaning the monument after seeing it was defaced.

Wright, who drove from his home in South Carolina, said those honored by the monument “are veterans and deserve the honor, respect, and dignity,” according to FOX46.

Wayne White, a US Air Force Vet, rounded up some friends and is working to help clean up a Charlotte WWII memorial after seeing on social media that it had been defaced. @FOX46News pic.twitter.com/KvrglFBwfN

The graffiti has reportedly been removed from the statue by White and his group.

The act of vandalism in Charlotte comes amid a national trend of destroying and defacing historic monuments in major cities. The destruction follows protests sparked by the death of George Floyd, who died after a police officer knelt on his neck for over eight minutes, viral video shows.

A statue of George Washington was pulled down in Portland on Thursday in one of the latest acts of vandalism by demonstrators, according to Time.

A group of people late Thursday night tore down a statue of George Washington that stood on the lawn of the German American Society in Portland, Ore.https://t.co/Xx9Y2S2jPX