Why So Few Arrests? Police Stand by as Vandals Tear Down Statues 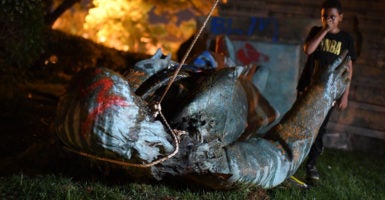 A young boy stands near the statue of Confederate Gen. Albert Pike after it was toppled by protesters Friday night at Judiciary Square in Washington, D.C. (Photo: Eric Baradat/AFP/Getty Images)

It’s not just Confederate statues being pulled down anymore.

Statues of historical figures that weren’t part of the Confederacy—and in some cases fought it—have been toppled in cities across the country, while police apparently did nothing to stop the crimes.

According to an Associated Press summary of weekend protests and vandalism, rioters tore down statues in San Francisco; Portland, Oregon; Raleigh, North Carolina; and Washington, D.C.

Only North Carolina police confirmed arrests in connection with the vandalism and destruction of property.

Perhaps the top non-Confederate statue toppled since the May 25 killing of George Floyd was in San Francisco, where protesters on Friday pulled down a figure of Ulysses S. Grant, the Union general who led the defeat of the Confederacy in the Civil War. Later, as president, Grant signed an anti-Ku Klux Klan law.

Protesters also toppled statues of Francis Scott Key, who wrote the national anthem, and of Spanish missionary Junipero Serra, an 18th-century Catholic priest who was given sainthood.

Monday night, a mob defaced and tried to pull down the statue of President Andrew Jackson in Lafayette Square across from the White House, but police moved in and stopped the vandals.

As of late Monday, the San Francisco Police Department’s public information office could not answer a yes or no question on whether anyone had been arrested in connection with damaging statues. But a spokesman said the department has been understaffed and was processing The Daily Signal’s request for information.

According to the report Saturday report by the AP, protesters threw objects at officers who were there to observe, but police did not intervene. The wire service reported that San Francisco police spokesman Adam Lobsinger said he knew of no arrests.

Also in Washington, D.C., protesters pulled down a statue of Confederate Gen. Albert Pike on Friday night and set it on fire.

President Donald Trump criticized the Metropolitan Police Department for “not doing their job” by allowing the statue, located close to the D.C. department’s headquarters, to be torn down.

“These people should be immediately arrested,” Trump said in a tweet. “A disgrace to our Country!”

“The statue in question sits in a federal park and therefore is within the jurisdiction of the National Park Service and the United States Park Police. No arrests were made,” Gertz told The Daily Signal in an email.

Park Police did not immediately respond to inquiries late Monday on the question of arrests.

The lack of arrests is almost certainly a result of two dynamics, either politics or an effort to prevent officers from using force, said Jason Johnson, president of the Law Enforcement Legal Defense Fund.

“Police officers are most likely following orders. Those orders could be based on pure politics, but could also be concern that if police officers intervene, it will result in use of force,” Johnson told The Daily Signal. “In the times we are living in now, any use-of-force incident could put police in a position to be summarily dismissed or face criminal prosecution.”

But police have a responsibility to respond to lawlessness, which does not include peaceful protest but actual destruction or looting, said John Malcolm, director of the Meese Center for Legal and Judicial Studies at The Heritage Foundation.

“If police stand by and watch, if vandals are allowed to act with impunity, then it is going to keep going on until somebody stops it,” Malcolm told The Daily Signal. “If they come across someone destroying public property, it is incumbent on police to respond.”

According to the arrest warrant, police charged Storrelli with assault, a felony, and injury to personal property, a misdemeanor.

The warrant says he “ran away from officers [and] resisted officers after being instructed to stay” and “kept grabbing the handcuffs to prevent their placement.”

In a press release Monday on the charging of James with inciting a riot—which is a felony—first-degree trespass, resisting an officer, and injuring personal property, State Capitol Police Chief Chip Hawley said:

According to the arresting officer, last night the suspect jumped the fence around the Three Presidents monument in Union Square and failed to go back to the other side of the fence after being told to do so several times. The arresting officer reported that after being placed under arrest, the suspect began to resist, kicking violently at the officer and the officer’s patrol vehicle, causing damage to it. Further investigation concluded the suspect was also a suspect in the events involving the monuments at the capitol Friday night.

Protesters pulled down two bronze soldiers on the 75-foot Confederate monument at the state Capitol. They hung the statue of a cavalryman by its neck over a streetlight, the News & Observer reported, and dragged the statue of an artilleryman through the streets to the Wake County Courthouse.

North Carolina Gov. Roy Cooper, a Democrat, ordered the removal of two more statues on the Capitol grounds—one dedicated to women of the Confederacy and another honoring Henry Wyatt, the first North Carolinian killed in a Civil War battle.

On Thursday in Portland, Oregon, protesters tore down a statue of the nation’s first president, George Washington, wrapped it in an American flag, and burned the flag. They spray-painted the words “genocidal colonist.”

Asked whether any arrests were made, Portland Police spokesperson Terri Wallo-Strauss told The Daily Signal in an email: “Not that I’m aware of, but understand we still have reports coming in.”

Earlier this month, the Miami Police Department arrested seven people in connection with the vandalizing of statues of two renowned explorers, Christopher Columbus of Italy and Juan Ponce de Leon of Spain.