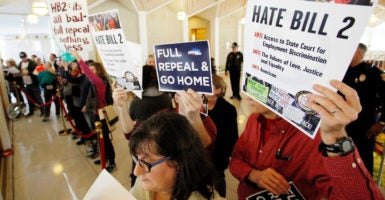 Opponents of North Carolina's H.B. 2 "bathroom bill" protest in the gallery above the state's House of Representatives chamber as the Legislature considers repealing the law, Dec. 21, 2016. (Photo: Jonathan Drake/Reuters/Newscom)

If the goal of compromise is to ensure that nobody’s happy, then North Carolina is succeeding.

With the NCAA’s ultimatum to repeal H.B. 2 just hours away, the state flew into action Thursday to try to appease the NCAA, which has become a puppet of the radical left. Turns out, the compromise only made liberals angrier.

In the “deal” struck by State Senate Leader Phil Berger and House Speaker Tim Moore, North Carolina rushed to pass a modified version of H.B. 2 in hopes of wooing the college sports association back to the state.

What the measure has succeeded in doing is revealing the definition of compromise for LGBT agitators—total surrender of those who oppose their radical agenda.

Among other things, the “deal” includes a three-year ban on local ordinances like Charlotte’s that open the restroom, locker room, and shower doors to both genders.

In negotiations, lawmakers said they wanted to give the courts time to decide the current cases on bathroom and shower policies. So everyone will just have to hold it until the moratorium expires in December of 2020 when there would be another legislative free-for-all.

What the LGBT agitators don’t like is that in places like government buildings and schools, the state would reset its policy to the pre-H.B. 2 standard (which is still gender-specific).

National groups from the Human Rights Campaign to the American Civil Liberties Union, NAACP, and even Planned Parenthood used social media to warn the “repeal’s” supporters.

The Human Rights Campaign’s Chad Griffin was furious. “This ‘deal’ does NOT repeal #HB2. It’s simply another version of HB2 dressed up in a way desperate lawmakers hope will save state’s economy.”

This “deal” does NOT repeal #HB2. It’s simply another version of HB2 dressed up in a way desperate lawmakers hope will save state’s economy.

Calling it a “kiss of death,” he let it be known that “There will be political consequences for those who [voted yes], Dem and Rep.”

Any ally of the LGBTQ community cannot support this new version of #HB2. There will be political consequences for those who do, Dem and Rep.

The ACLU was just as upset. In a tweet to the sports association responsible for this last-minute legislating, it posted, “Hey, @NCAA: North Carolina ‘compromise’ bill doesn’t repeal HB 2. We’re not ok with compromising human rights, and you shouldn’t be either.”

Equality NC, the state’s LGBT hub, used even stronger language, posting that it had nothing but “heartfelt disdain” for lawmakers who put the bill on the table.

“This proposal is a train wreck that would double down on anti-LGBTQ discrimination. North Carolinians want a clean repeal of H.B. 2, and we urge our allies not to sell us out,” Chris Sgro, executive director of Equality NC, said in a statement. “Those who stand for equality and with LGBTQ people are standing strong against these antics.”

Conservatives, on the other hand, are frustrated that the state is even trying to appease these cultural bullies. As anyone who’s tried to negotiate with LGBT activists knows, they won’t be satisfied until conservatives have unilaterally surrendered.

There’s no need to give even the appearance of compromise on what a majority of Americans believe are commonsense protections. Especially not now, when Texas and 12 other states are on the verge of solidifying their own privacy laws.

“This … will not solve anything!” said our friends at the NC Family Policy Council and NC Values Coalition. And ironically, the NCAA, who this whole “deal” was meant to placate, wouldn’t even comment on whether it supported the idea.

“If H.B. 2 was right to begin with,” Lt. Gov. Dan Forest said, “which I believe it was, then why are we repealing it? If it is wrong, then why wait four years to fix it? Such ambiguity undercuts the legitimacy of a law that we have fought so hard to defend. We are yielding the moral high ground and giving in to a new form of corporate extortion from an unaccountable, out of state, non-elected, tax-exempt organization (NCAA) and for what? … a ballgame? Why are we allowing them to dictate to us, laws that govern the protection of our people? We should have the backbone to tell them to take a hike.”

If state leaders are suddenly worried about the economic impact of H.B. 2, they shouldn’t be. That fake news has been debunked over and over again by everyone from PolitiFact to Forbes.

Even the state’s own tourism and business reports have proven the critics wrong. Business is booming, The Washington Times points out.

Still not convinced? Read this latest analysis from The Heritage Foundation’s number crunchers.

As for the loss of the NCAA and ACC, Forest must feel like a broken record. The total fallout, he explained—as recently as this week—was “less than one-half of 1 percent of the state’s gross domestic product.

And even if it were more, he added, “We don’t put a price tag on the safety and security of women and children in North Carolina.”

Here’s my take: While this measure doesn’t violate the privacy of women and children by allowing dangerous policies like Charlotte’s to be re-established, it does signal that elected officials are ultimately willing to surrender to the courts and the NCAA on matters of safety and public policy.

Lawmakers who voted for this legislation have no right to complain about activist judges.