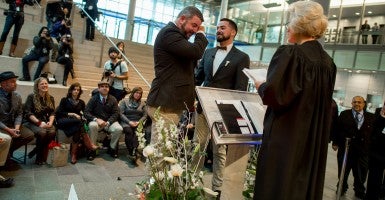 So it’s a win-win for everyone. No one loses anything.

After all, government employees have rights, and those rights should be protected. Had this bill not become law, magistrates and clerks who decline to take part in same-sex marriages could have been removed from office, and “shall” be guilty of a crime that is punishable by up to 120 days in jail.

Consider a county clerk who has served in her job for decades issuing marriage licenses. Now the government has redefined marriage—and her job. Should she be forced in all circumstances to violate her beliefs? Indeed, two former magistrates are suing the North Carolina Administrative Office of the Courts precisely because they were told to issue same-sex marriage licenses or be fired and risk criminal prosecution.

They resigned—but they shouldn’t have had to. Indeed, Title VII of the Civil Rights Act of 1964 requires the government to accommodate conscientious objectors as best it can. Title VII applies to all employers, including the federal government, and requires that employers grant reasonable religious accommodations to employees, provided those accommodations don’t create an undue hardship for the employer.

>>>For more on this, see Ryan T. Anderson’s new book, “The Future of Marriage and Religious Liberty.”

The North Carolina law makes it clear that magistrates should be accommodated whenever possible—and, at the same time, that all citizens should be able to receive marriage licenses. In other words, it’s a win-win situation. The law of religious accommodation for public employees is complicated but perhaps not as difficult as we sometimes make it.

Religious objection is not a trump card, but employees’ religious objections should be accommodated when possible. The North Carolina law is a great example of this and a good model for achieving peaceful coexistence going forward.