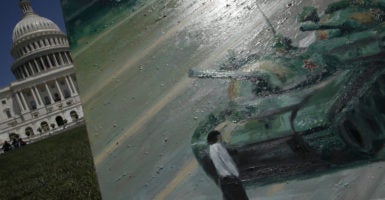 A painting of "Tank Man" is on display Tuesday on the West Lawn of the Capitol during a rally to commemorate the 30th anniversary of the Tiananmen Square massacre in China.(Photo: Alex Wong/Staff/Getty Images)

Thirty years ago, a series of student-led demonstrations in Beijing were put to an end, violently, by China’s military.

After months of peaceful protests in 1989, the Chinese Communist Party unleashed the might of its military on the unarmed civilians: this included the use of machine guns and tanks.

Unofficial death tolls are often estimated to be in the thousands, however, the actual number is unknown.

At a regional forum in Singapore, Chinese Defense Minister Wei Fenghe recently defended the Tiananmen Square crackdown, in which the government and the military killed hundreds if not thousands of protesting citizens and wounded, imprisoned, or otherwise suppressed countless others.

“The past 30 years have proven that China has undergone major changes,” Fenghe said, according to BBC.

The repression was worth it, he said, because since those days in 1989, “China has enjoyed stability and development.”

The Chinese government today suppresses knowledge of what happened at Tiananmen Square and hides information about the protests from its people.

Yet, while the Chinese government has worked relentlessly to downplay and quash all memory of what took place on June 4, 1989, in Tiananmen Square, survivors and allies of the protest movement continue to carry on its legacy and shed light on the reality of the communist regime.

Some of them held a commemorative event Tuesday in front of the U.S. Capitol to mark the 30th anniversary.

The common theme of those who spoke about the Tiananmen Square protests was the need to remember the sacrifice of those who bravely protested–many of whom paid with their lives–and to continue their fight in the long struggle to bring freedom to the people of China.

Additionally, as many speakers mentioned, the economic growth taking place in modern China simply has masked the underlying lack of freedom and continual violations of individual rights that occur under the authoritarian government.

Among the speakers were those who personally suffered under China’s ruling Communist Party, including survivors of the Tiananmen Square protests.

Their goal was to ensure that the Communist Party is “held accountable for its crimes against the people of China,” Marion Smith, president of the Victims of Communism Memorial Foundation, said in a speech at the event.

The current Communist Party, led by Xi Jinping, China’s president, suppresses ethnic and religious minorities such as the people of Tibet and the Uighur Muslims, and continues to repress the rights of Chinese citizens.

“Today the official party line is that the unrest and turmoil in China in the 20th century was worth it, because China is now a rising world power and everyone in China is improving,” Smith said.

This is a mirage, Smith said:

In Reality, Xi Jinping’s ‘socialism with Chinese characteristics’ today includes the continued destruction of the Tibetan people’s culture, the detention of 1 to 3 million Uighurs in concentration camps, the persecution of Christians, the mutilation and organ harvesting of Falun Gong and other prisoners of conscience, the forced abortion conducted on mothers who want to keep their babies, the harassment of journalists, attorneys, and artists, the brainwashing of entire new generations of Chinese in schools and through the new social credit system, and the imprisonment of Hong Kong students and booksellers.

Americans are becoming more aware, Smith said, that the modern People’s Republic of China is an “unreformed communist dictatorship that tramples on human rights inside of China and threatens the peace of the world.”

While the regime cracks down on the truth, some are working to keep the spirit of the Tiananmen protests alive, if not for themselves, then for future generations.

This includes the “Tiananmen mothers,” the mothers of the men and women killed in the Tiananmen protests 30 years ago.

Smith presented a representative of the group, Mi Ling Sui, who is the communications director for Human Rights in China, with the Victims of Communism Memorial Foundation’s Truman-Reagan Medal of Freedom.

The event featured large portraits of the mothers with photos of their children.

Historian and author Lee Edwards, a distinguished fellow in conservative thought at The Heritage Foundation and a co-founder of the Victims of Communism Memorial Foundation, spoke to the crowd about how shining a light on the atrocities that took place at Tiananmen and continue in modern China will usher in a time when the people of China will be free.

Edwards said the truth of what happened on that “bloodstained June morning” 30 years ago cannot be suppressed because of those who continue to speak out.

Two years after the Tiananmen Square massacre, Pelosi said, she and a bipartisan team of American legislators traveled to the site of the protests and unfurled a flag in tribute “to those who died for democracy.”

The lawmakers were quickly chased off by the Chinese military, she recalled.

After her speech, Pelosi helped to unveil a lifesize statue of “Tank Man”–the famed protester who stood in front of a tank in Tiananmen Square yet to this day has not been identified–created by sculptor Thomas Marsh.

Marsh also created the 10-foot-tall bronze replica of the Goddess of Democracy, displayed as part of the foundation’s Victims of Communism Memorial just northwest of Union Station in Washington.

Tiananmen Square protesters in 1989 constructed the original, 33-foot-tall statue out of foam and papier-mache before soldiers destroyed it.