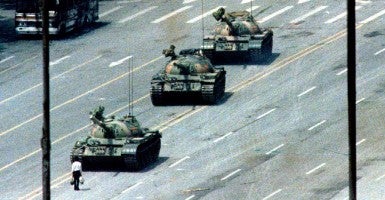 An unknown Beijing citizen who would come to be known as "Tank Man" stands in front of tanks on the Avenue of Eternal Peace on June 5, 1989, as military clashed with protesters in Tiananmen Square. (Photo: Stringer/Reuters/Newscom)

On June 4, 1989, leaders of the Chinese Communist Party ordered the People’s Liberation Army to open fire on thousands of student protesters in Beijing’s Tiananmen Square to stamp out a pro-democracy protest. A day later, the famous “Tank Man” episode played out before camera.

Nonviolent and unarmed civilians were confronted by military troops and tanks, resulting in many deaths.

Officially, 241 people were killed, although unconfirmed estimates of the death toll are into the thousands.

Since the Tiananmen Square incident, the Chinese government has dedicated considerable effort to erase the event from Chinese collective memory.

Even on the 26th anniversary of the protests, the Chinese government continues to detain suspected activists and take measures to censor any mention of the event on the Internet.

The anniversary of Tiananmen is of particular note this year because it follows the pro-democracy protests in Hong Kong. Protesting students during a demonstration on Tiananmen Square in Beijing on May 19, 1989. (Photo: Edgar Bauer/dpa/picture-alliance/Newscom)

On May 19, 1989, protesting students gathered during a demonstration on Tiananmen Square in Beijing. Twenty-six years ago, the protests widened in China’s capital but were eventually beaten down violently. (Photo: Edgar Bauer/dpa/picture-alliance/Newscom) Residents of Beijing surround an army convoy of 4,000 soldiers in a suburb of the city to prevent them from continuing to Tiananmen Square, where the pro-democracy students are in this May 20, 1989, photo. (Photo: Stringer/Reuters/Newscom) A portrait of China’s late Chairman Mao Zedong overlooks the “Goddess of Democracy,” modeled after the Statue of Liberty, in Beijing’s Tiananmen Square in June 1989. (Photo: Stringer/China/Reuters/Newscom) Crowds of jubilant students surge through a police cordon before pouring into Tiananmen Square during a pro-democracy demonstration on June 4, 1989. (Photo: Stringer/Reuters/Newscom) A protester wears a shirt showing numbers significant to the Tiananmen Square tragedy during a protest in front of the Chinese Embassy in Kuala Lumpur, Malaysia, June 4, 2014. (Photo: Shamshahrin Shamsudin/EPA/Newscom) Chinese paramilitary police are deployed to the vicinity of Tiananmen Square in Beijing, China, June 3, 2015, to ensure no uprisings from the Chinese people on the 26th anniversary of the bloody incident. (Photo: Rolex Dela Pena/EPA/Newscom) A Chinese police outpost is set up outside the Forbidden City across Tiananmen Square in Beijing on June 3, 2015. (Photo: Rolex Dela Pena/EPA/Newscom) Armed police officers march at Tiananmen Square in Beijing on June 4, 2015, the 26th anniversary of the bloody crackdown on pro-democracy demonstrators. (Photo: Kyodo/Newscom) People attend a vigil in memory of the victims of the Tiananmen Square massacre, in Macau, China, June 4, 2015, marking the 26th anniversary of the government crackdown on pro-democracy demonstrations. (Photo: Carmo Correia/EPA/Newscom)