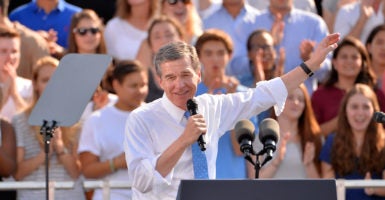 Democratic Gov. Roy Cooper vetoes “An Act to Require Compliance with Immigration Detainers and Administrative Warrants,” after its passage by the Republican-controlled Legislature. Pictured: Cooper campaigns during an event on Nov. 2, 2016, for Democratic presidential nominee Hillary Clinton at the University of Chapel Hill in Chapel Hill, North Carolina. (Photo: Sara D. Davis/Getty Images)

Democratic North Carolina Gov. Roy Cooper vetoed a bill that would have mandated local law enforcement officials in the state to cooperate with Immigration and Customs Enforcement.

Cooper on Wednesday vetoed House Bill 370, titled “An Act to Require Compliance with Immigration Detainers and Administrative Warrants.” If the legislation had been signed into law, sheriffs and other law enforcement officials working in North Carolina would be required to honor ICE detainer requests.

ICE regularly sends detainer requests to detention centers holding suspects believed to be living in the U.S. illegally. These requests ask that suspects remain in custody until ICE agents are able to retrieve them. Under the North Carolina bill, authorities who do not honor detainers would be subject to dismissal.

Such a law, which has been signed in other states, would clamp down on “sanctuary” cities and other municipalities that explicitly ignore ICE detainer requests.

“This legislation is simply about scoring partisan political points and using fear to divide North Carolina,” Cooper said in a Wednesday press release. “This bill, in addition to being unconstitutional, weakens law enforcement in North Carolina by mandating sheriffs to do the job of federal agents, using local resources that could hurt their ability to protect their counties.”

The bill was passed by North Carolina’s Republican-controlled Legislature, with GOP members ripping the Democratic governor for the veto.

“Law enforcement officers have a sworn responsibility to protect their citizens—and that includes cooperating with federal authorities,” North Carolina state Sen. Chuck Edwards said. “Governor Cooper, who prefers to pander to his far-left supporters, we will protect North Carolinians and plan to override his irresponsible veto.”

Cooper, who is up for reelection in 2020, issued his veto just days after ICE agents captured Oscar Pacheco, an illegal alien living the state. Despite being charged with first-degree rape and “indecent liberties” with a child, authorities in Mecklenburg County, North Carolina, did not comply with an ICE detainer, according to the agency.

ICE went on to provide an extensive list of recent detainer requests ignored by Mecklenburg County. Of the 22 illegal aliens featured on the list, many of them were charged with assault and rape.