The Significant Difference Between Protests and Riots 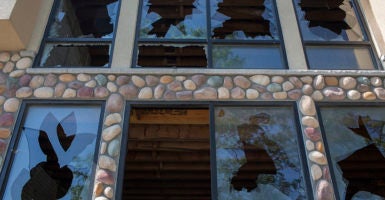 Buildings around the Third Police Precinct in Minneapolis, Minnesota, lay in ruins after being burnt down by angry crowds in reaction to the murder of George Floyd by a police officer, June 4. (Photo: Andrew Lichtenstein/Corbis/Getty Images)

I’ve been active in law enforcement for more than 50 years. During that time, I’ve seen numerous protests. I’ve also seen far too many riots. There’s a difference.

Orderly protest is part of our American tradition. It is an exercise of our constitutional rights of free speech and peaceable assembly. It is one way we the people can make our voices heard, our views known to those in power.

But rioting, looting, destroying property, and attacking fellow Americans have no place in orderly protest. They are, in fact, the very antithesis of orderly protest. And in the end, these patently illegal actions not only undermine the moral standing of legitimate protests. History shows that they also wind up hurting most of the very people that true protesters aim to help.

Peaceful protest can help change America for the better. Organized protests and peaceful demonstrations during the Martin Luther King Jr. era produced tremendous progress for the civil rights movement; the church bombings and other violent actions of segregationists only advanced King’s cause.

Those nonviolent protests changed laws and changed lives. In today’s America, there are more successful African Americans—and more opportunities for African Americans to succeed—than at any point in our nation’s history.

Yet, recent events make painfully clear that America’s race issues are not fully resolved. George Floyd’s tragic death should bring us closer together. And peaceful protest can help do that.

Unfortunately, just as in previous protests, not everyone who has taken to the streets has come to build up the black community and bind us together.

Some believe their demands for change will never be taken seriously unless they demonstrate their willingness to “burn it down.” But burning things down only polarizes communities, making it even more difficult for a just cause to advance. Violence is not only unacceptable, it’s useless as a tool for bring positive social change.

Also on the streets are Antifa anarchists and other radical extremists who see the protests as an opportunity to sow chaos and division, and who seek to incite the killing of police officers. They care nothing about honoring the memory of George Floyd or trying to work toward a more common understanding on race issues.

This, too, must not be tolerated.

Then, of course, there are political opportunists. They may not be in the streets, but they see what’s happening as a fantastic opportunity to score points and mobilize their bases. Their demands to defund or dissolve police forces are self-defeating and absurd. Shame on them. This is not a political issue; it is a moral one.

Rioters are destroying families’ futures and stealing the American dream. They have killed those sworn to protect us, harmed innocent citizens, and damaged many of the businesses that provide groceries, work, and necessary services in our minority communities.

Many of these businesses were already teetering on the edge due to the COVID-19 shutdown. Mob violence assures that many of them will never recover—and the jobs they provided will never return.

To bring about change in society, we must identify wrong policies and wrong actions where they exist. We must also hold accountable and punish wrongdoers. But we should not resort to lawlessness or stigmatize courageous, lawfully acting police officers.

We must also recognize that government can’t change hearts. This is work we must each do ourselves. We can start by asking ourselves the question posed by theologian Francis Schaeffer: “How should we then live?”

We can also help change the hearts of others, by reaching out in a spirit of grace, openness, and understanding. We must lift each other up and find ways to help heal those who have been harmed.

Only when we come together and listen to one another, rather than shouting at one another, can we begin to heal and to be healed.