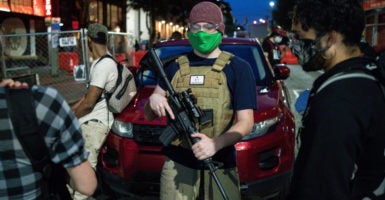 After repeated clashes with, at times, violent protesters, the Seattle Police Department abandoned its East Precinct building in Seattle’s Capitol Hill neighborhood. On June 8, protesters occupied and barricaded the six blocks surrounding it. They have since named their territory the Capitol Hill Autonomous Zone.

The protesters have now published a list of demands.

In other times or other cities, these ideas would be politically infeasible. But Seattle’s leaders are at least sympathetic to them, if not actively supporting them.

Seattle’s mayor and all of its city councilmembers are staunch progressives. One councilmember, Kshama Sawant, marched with protesters as they occupied the Seattle City Hall.

Sawant has previously called for “a powerful socialist movement to end all capitalist oppression and exploitation.”

As outlandish as some of these proposals are, they likely face weaker political headwinds than one might think.

Thankfully, however, the Constitution prohibits some of these demands.

Consider, for example, the demand that all “people in color” currently imprisoned for violent crimes be retried by a “jury of their peers in their community.”

The Constitution already guarantees the right to be tried by a jury of their peers, and anyone convicted of a crime benefited from that right unless they voluntarily waived it.

But, of course, what the protesters probably mean by a “jury of their peers” is a jury that shares the same skin tone with the accused. To accomplish that, any potential jurors who did not share the defendant’s skin tone would have to be struck from the jury pool based solely on their race, and that is not constitutional.

And what of the courts? The protesters call for their abolishment, but the Constitution guarantees a variety of rights that are dependent on competent courts to administer them, such as the right to a jury trial, the right to due process, and the right to be secure against unreasonable searches and seizures.

Take away trained judges and the procedural safeguards of the court system, and these rights become paper tigers.

Likewise, the Constitution guarantees a number of rights that are dependent upon some form of law enforcement to give them effect. Consider, for example, a criminal defendant’s rights to confront his accuser and to compel witnesses to testify on his behalf.

To enforce those rights, some group of people must be able to wield the power of the state to force other people to do something that they might not want to do. You don’t have to call them “police,” but the Constitution requires that they exist.

What about the protesters’ economic demands for rent control and an end to evictions? They might as well abolish private property, because the effect of such policies is to eliminate all the rights associated with property ownership, which the Constitution protects.

And finally, what of their demands for reparations for black people? Any such blatantly race-based scheme would have to pass the highest level of judicial scrutiny, and a sea of unanswerable questions make that difficult to conceive: Who is sufficiently “black”? How much did historical discrimination cause a claimant’s modern problems? Would reparations solve those problems? The list goes on.

The protesters’ answer to these constitutional concerns might be: “We reject the Constitution and all the limits it places on us.” Well, the rest of society does not.

More importantly, those who control the levers of power that could, theoretically, make this list of demands a reality have sworn an oath to uphold the Constitution.

As such, the Constitution prevents at least some of these demands from becoming a reality, even if politicians support them.

Nevertheless, the Constitution’s bulwark should not make us complacent in the face of demands like these. Seattle’s protesters, and other radicals like them, will figure out that the Constitution is the biggest obstacle to their agenda, and they will come for it too.