Who Will Bear Ultimate Cost of Rioting? 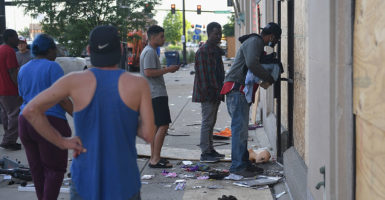 Given the current political environment, it does not benefit a black or white politician to take those steps necessary to crack down on rioting and looting. Pictured: Onlookers peer into a damaged business following overnight riots and looting on June 2 in St. Louis, Missouri. Four police officers were reportedly shot in St. Louis overnight during violent clashes with protesters leading to looting and damage to local businesses. (Photo: Michael B. Thomas/Getty Images)

No decent person can support George Floyd’s mistreatment, or the mistreatment of anyone else, at the hands of police officers with the sworn duty to uphold the law.

The Minneapolis authorities moved quickly, and Derek Chauvin was fired from the Minneapolis Police Department, placed under arrest, and charged with second-degree murder and other charges.

Peaceful protest in any cause is as American as apple pie, but what we saw in the wake of Floyd’s murder is as despicable as anything recently seen in our nation.

What makes it worse is the silence and seemly support in many quarters for anarchists who have hijacked the protests to promote their own ends. These are the white liberals and leftists groups like Antifa who could care less about the major problems that exist in black communities and made worse by the rioting and looting.

“Black Entrepreneurs 2020 Trends: A look at African-American-owned businesses in 2020” is a survey of black-owned businesses. When blacks were asked how they view themselves in the present political climate, most were either “very confident” or “somewhat confident.”

If that survey were run today, I doubt whether we would get anywhere near the same results. Part of the difference would be from the government’s economic shutdown of our nation, but most of it would be the result of the recent wanton destruction within black communities.

There are videos of legally armed black business owners standing outside their shops to protect them. There are other scenes of black small-business owners in tears over the destruction of businesses that they’ve put their life’s savings into.

My question to the white Antifa anarchists, and their fellow black looters, is how does the destruction of black-owned business promote justice for the murder of Floyd?

The recent looting and property destruction, as well as the high crime rates in many black neighborhoods, have the effect of a law that outlaws economic growth and opportunities. During the recent mayhem in black communities, stores of many types were looted and destroyed.

If you said black people, you are right. Black people must bear the expense and inconvenience to go to suburban shopping malls if they are to avoid the higher prices charged by smaller neighborhood stores that have survived the rioting and looting.

Even when there is not the kind of social disorder of recent weeks, lawlessness is the hallmark of many black communities. Ultimately, the solution to this lawlessness rests with black people.

Given the current political environment, it does not benefit a black or white politician to take those steps necessary to crack down on lawlessness in black communities. That means black people must become intolerant of criminals who make their lives living hell, even if it means taking the law into their own hands.

That brings me to one of the most disturbing aspects of the rioting and looting. That is the seeming impotence of people whom we elect and pay to enforce the law. That includes governors, mayors, and police chiefs who refuse to use their law enforcement powers to protect citizens and their property from criminals.

Unfortunately, politicians who call for law and order are often viewed negatively. But that makes little sense. Poor people are more dependent on law and order than anyone else.

In the face of high crime or social disorder, wealthier people can afford to purchase alarm systems, buy guard dogs, hire guards, and, if things get too bad, move to a gated community.

These options are not available to poor people. Their only protection is an orderly society.