Why These African American Leaders Reject the Left’s Victim Narrative 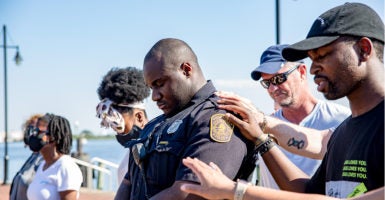 Conservative leaders who are black call for Christians to stand against the victim rhetoric of the left and seek unity in the wake of the killing of George Floyd. Pictured: Protesters pray for a police officer June 7 during the City Collective Prayer March in Norfolk, Virginia. (Photo: Annette Holloway/Icon Sportswire)

The reality of racism in America has led to cries for justice across the nation, as the May 25 death of George Floyd in police custody in Minneapolis sparked peaceful protests as well as violence and looting.

But conservative African American leaders say they’re concerned that the message being sent to the nation’s black community is one of victimhood.

“In the community right now, they are teaching the children to be victims,” said Casper Stockham, an author, speaker, and radio show host. “They are teaching them that police are bad and if you are out there, walking down the street, you are going to get shot by a cop.”

Stockham’s concerns were echoed by three other African American conservative activists on the Centennial Institute’s webinar Thursday titled, “The Sin of Racism and America’s Promise of Equality.”

CJ Pearson, the youngest voice on the webinar at age 17, spoke pointedly about his disgust with the far left’s efforts to politicize the death of Floyd and use tragedy to further its own agenda.

“Let’s just be frank about it. Let’s call it disgusting because that is exactly what it is,” said Pearson, founder and president of the nonprofit Last Hope USA, which promotes civics education, adding, “You have Antifa going into black communities and burning those communities to the ground. That is an issue. They are using his death to do that.”

Pearson, who will turn 18 on July 31, also criticized the left for not presenting real solutions to racism and violence but instead calling for police departments to be defunded, an idea he called “not even a serious argument.”

Biff Gore, a pastor and singer, pointed to police unions for not confronting police brutality.

“It’s the unions,” Gore said. “The unions need to crack down on rogue cops.”

Pearson and the others were clear that racism is deplorable, but said Americans should not forget the progress the country has made.

“I do believe that racism exists, but I also believe that it’s dying out in our country,” Gore said. “And when something is dying out, you know what happens? It gives a fight. … Racism is fighting to stay alive, but it can’t because we serve a mighty God.”

Gore said Black Lives Matter is a “manufactured organization” that is one of the groups fueling a harmful racist narrative.

“If they really cared, they would be in the ’hood stopping black-on-black crime,” he said. “Secondly, they would be outraged at the genocide in the black commuhity at the hands of the abortion mills.”

Bound4LIFE, a pro-life advocacy group, estimates that 37% of all babies aborted are black and that for every 1,000 black babies born, another 444 are aborted.

America is facing a serious race problem and at the end of the day that issue boils down to sin, Gore argued, saying the church has to be a part of the solution because ultimately it has the answer in Jesus Christ:

“There is only one race, the human race,” said Gore, who outlined his own experience with racism when he joined the Army as a young man. “First day in the military, a guy called me the N-word, and we got into a scuffle. I remember calling my dad and my father said, ‘Son, you can either learn how to fight [with your fists] or learn how to fight by learning from the people around you.’”

Gore’s father instructed him to build relationships with those who looked different from him, and promised that through those connections more similarities than differences would be found.

He took his father’s advice and the man he fought with that day became one of his best friends, Gore said, because he was “able to show him that love conquers all.”

“And I was also able to show him that I was his friend,”  Gore said.

Unfortunately, not all experiences of racism end in changed hearts and minds, Gore said, which is why what ultimately is needed is a spiritual revival.

The leaders spoke of their own efforts to speak with those who are hurting and angry in the wake of Floyd’s death as they seek to take steps toward a reconciled America.

“We know as Christians, we need to meet the needs of the people in that community,” said Antonia Okafor Cover, a gun rights activist and founder of EmPOWERed, a Second Amendment advocacy group for college women. “They are not going to listen to us if we just go there and say, ‘Look, you need to change your mind on this issue.’”

In spite of being six months pregnant, Okafor Cover traveled to Minneapolis after Floyd’s death to talk with people in the community and see for herself what was happening there.

“It was really a benefit to be there,” she said, because instead of all the rioting shown by the media, she witnessed churches and others coming together.

While in Minneapolis, Okafor Cover said she sought to explain the importance of the Second Amendment to individuals and “help people understand the self-defense aspect” of the gun debate.

“But they were so much more open to my message when they saw first that I was helping clean up the area, when I was concerned about their livelihood,” she said.

Real change can’t take place through words only, Stockham said, and change in communities of color requires what he calls “a SPARK: system, plan, access, resources, and knowledge.”

“Somebody wants us to start a race war,” Gore said, “and that is not going to happen, because I believe most people in this country see beyond the foolishness. The woke people have hijacked us, but if we stand on the Word [of God], which is more powerful than anything in this universe, we will overcome.”