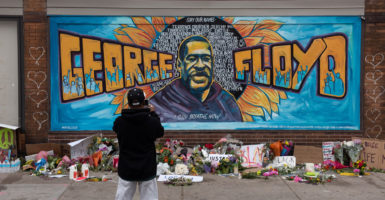 Americans must not miss the opportunity to advance the cause of justice in the wake of a black man’s death at the hands of Minneapolis police, black leaders and commentators told The Daily Signal.

The digitally recorded images of George Floyd’s dying breaths under the knee of a city police officer Monday evening sparked large protests in Minneapolis and across the nation in the following days.

Mobs also used Floyd’s horrific death as an excuse to loot and burn down stores and to torch the abandoned 3rd Precinct station where the officers involved worked.

J.C. Watts, a former congressman from Oklahoma, said the Floyd case demands a response from all Americans of good will, regardless of skin color.

“This incident shouldn’t be limited to African American leaders,” Watts told The Daily Signal in an email. “Anyone looking at this situation and observing the video couldn’t help but conclude that a man on the ground, on his stomach, with hands behind his back, with handcuffs on and surrounded by four officers and a knee on his neck—all leaders, red, yellow, brown, black, and white should be able to say that was inhumane.”

Floyd, 46, was black. Derek Chauvin, 44, the veteran officer charged with third-degree murder in his death on a Minneapolis street, is white.

In a Facebook post reflecting on the case, Heritage Foundation President Kay C. James called herself “frustrated and exhausted.”

Black Americans like herself, James wrote, “sit up at night with all the normal fears any parent would have when their kids are out, but have to add to that worry that they may not make it home just because they are black males.”

“I was stunned years ago when I realized that my white friends did not have to have ‘the talk’ with their sons,” she wrote.

The Daily Signal sought observations Friday from black writers, activists, and leaders who consider themselves to be on the conservative end of the political spectrum.

“We should support lawful protest but strongly oppose the violence,” Bob Woodson, founder of the Washington-based Woodson Center, said in an email.

Those who resort to violence bring long-term economic consequences to their own neighborhoods on top of those caused by the COVID-19 pandemic, Woodson said, pointing to reports such as that of a black firefighter who “lost his savings because looters burned down his sports [bar].”

Looting and destroying property is “doing this man a huge disservice,” Deana Bass Williams, co-founder of Bass Public Affairs, said of Floyd in a phone interview.

But although such acts of violence are “despicable,” Williams said, what happened to Floyd requires appropriate action by law-abiding Americans.

“I really crave more outrage and more unified disgust in general, not just about George Floyd, but about police brutality against black men from the white evangelical and conservative community,” she said.

It starts with courageous conversations, said author and commentator Sophia Nelson. She wrote a message to her white friends on Facebook, challenging them to be conscious of color. She said none of us are truly “colorblind.”

“It’s wrong to keep pretending you don’t see our color or what we experience,” Nelson wrote. “We gotta face it if we are ever to fix it. My reality is not yours. It never will be. But let us begin the courageous conversations.

In the end: You should be shocked. You should be horrified. You should be weeping and uncomfortable. What we all saw the policemen do to George Floyd has happened for a long time. We aren’t shocked as a community. We are pissed! It dates back to the founding of America. And we are still struggling with that early stain on our young nation, even 243 years later. We still need to work together to perfect this Union.

Jennifer Carroll, a former lieutenant governor of Florida, said in an email that it is outrageous that Floyd died because of “the horrible and inexcusable behavior of a law enforcement officer who is sworn to protect our citizens.”

“It was good to see President Trump taking this issue seriously and doing the right thing by deploying the Department of Justice to take immediate action to investigate Floyd’s death,” Carroll told The Daily Signal.

Multiple previous complaints of misconduct had been filed against Chauvin, a 19-year police veteran, a fact that Carroll called “very concerning.”

She is among those asking why officials took no action against Chauvin sooner, action that could have prevented Floyd’s death.

The harrowing video recorded on a smartphone shows Chauvin pressing a knee against Floyd’s neck as he lies handcuffed on the pavement beside a Minneapolis police cruiser. Floyd tells Chauvin he can’t breathe and begs to be allowed to stand, but Chauvin pins him until he appears to lose consciousness.

Looting and arson broke out across Minneapolis in response to Floyd’s death, distracting from largely peaceful protests. The situation in the Midwestern city became so tense that Minnesota Gov. Tim Walz called in the National Guard, even as unrest surfaced in other cities across the nation.

The Minneapolis Police Department fired Chauvin and three other officers Tuesday for their involvement in Floyd’s death during his arrest on a fraud charge. Chauvin was arrested and charged Friday with third-degree murder and manslaughter.

Star Parker, a syndicated columnist and founder of the Center for Urban Renewal and Education, told The Daily Signal that President Donald Trump is in a unique position to effect necessary change where other presidents have failed.

“I think that since we’re not in 1950 [but] in 2020, with a president that really wants to solve problems while in office, perhaps America can have the discussion that has needed to take place since the Civil Rights Act was signed into law in the ’60s,” Parker said in an interview. “President Trump has made a commitment to the African American community that part of his legacy will be to address the fork in the road that occurred after the Civil Rights Act was signed into law.”

As the mother of an 18-year-old son, Wilbon said in an interview, Floyd’s death in police custody “scares” her.

“It has to stop, and people have to stand up and say that this is wrong,” Wilbon said.

Raynard Jackson, president and CEO of a Washington-based consulting and public relations firm, told The Daily Signal in an email that he was disgusted by how Floyd died.

“I was thoroughly repulsed by Mr. Floyd’s death. There was absolutely no excuse for him to have been murdered in such a callous manner,” Jackson said.

“I think the local authorities did the best they could under the circumstances—they fired the four policemen almost immediately, and within four days the perpetrator has been charged with murder. Now the wheels of justice must be allowed to take [their] course.”

Jackson, who writes a popular column, argued that African American conservatives should work on solutions with Attorney General William Barr.

“I want to bring in a small group of black conservatives to meet with AG Bill Barr to address the issue of race,” Jackson said.

Jackson cited Winston Churchill’s observation that each human being should be ready for “a chance to do a great and mighty thing … fitted to his talents.”

Armstrong Williams, a syndicated columnist and host of “The Armstrong Williams Show,” said he was deeply affected by the video images showing Chauvin pressing a knee against Floyd’s neck for more than seven minutes while other officers appeared to do nothing to stop him.

“It stood out to me how the officers were devoid of humanity, compassion, any kind of connection,” Williams said in an interview, adding:

I asked myself, what has happened to our law enforcement professionals where they felt nothing for this man?

I asked myself, is this what happens when you serve in the force too long? Does it come from training? Where does it come from? … Just look at the eyes—there was no soul in the eyes.

“It is hard to watch the video of George Floyd being killed without concluding that his death was both tragic and the result of an evil act,” Nelson said in an email, adding:

He clearly posed no threat to the officer who killed him. The subsequent firing of the four officers involved was a good start. As someone who is not a prosecutor and is not privy to the details of the case, I have no way of judging whether the charges for the officer who killed Floyd are appropriate, but I can say that to a lay observer, they seem too lenient.

Americans must mourn, Nelson said, but for change to happen, the regret must not stop with mourning.

“I believe the correct response for Americans right now is to mourn the senseless loss of life, to demand that justice be done, and to pray for peace,” Nelson said, adding:

We should not paint all protesters with the same brush. Many are protesting peacefully with restraint, while some—many from out of town, I am told—are behaving badly. It is tempting to focus on the chaos and violence, but we must affirm the overwhelming majority of Americans of all races who long to live in peace with one another.

James, the Heritage president who was part of the civil rights movement of the 1960s and was one of about two dozen students who helped desegregate her school, said it’s time for action.

“Enough is enough,” she said. “I’m not just upset, I am exhausted. I have worked for 70 years on the issues surrounding race in America. It’s time for all Americans to get our act together and take this seriously.”