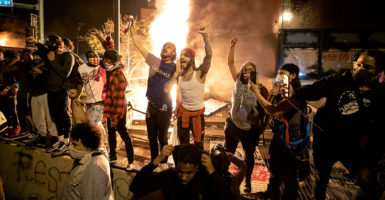 Minneapolis' 3rd Police Precinct was set on fire by protesters after it was evacuated Thursday night. (Photo by Carlos Gonzalez/Star Tribune via Getty Images)

On Friday morning, Minneapolis looked more like a war zone than an American Midwestern city.

The death of George Floyd, an African American man, has sparked riots, protests, and looting across Minneapolis and in other U.S. cities.

Floyd, 46, died on Monday after a police officer, Derek Chauvin, arrested him and proceeded to press his knee again Floyd’s neck while he lay on the ground telling the officer: “I can’t breathe.”

Video footage of Floyd’s arrest has outraged many Americans and led to rioters setting numerous buildings on fire in Minneapolis, including a police station, and the looting and destruction of businesses and other properties.

Police officers are working to curb the violence, and Minnesota Gov. Tim Walz has called in the National Guard to help squelch some of the unrest.

The following are a number of photos showing the results of the violent protests.

Editor’s note: One of the photos was replaced after publication, due to a swear word in the original photo’s background.