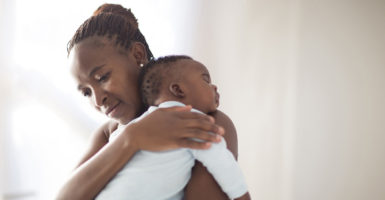 African American pro-life leaders decry what they call the eugenics mentality of abortion providers perpetuating the high abortion rate among black women and urge promoting crisis pregnancy centers as an anti-abortion outreach to minority communities, as an alternative to Planned Parenthood.

The black anti-abortion activists also say the right to life is the civil rights issue of our time.

A recent panel discussion, “How Defunding Planned Parenthood Impacts the Black Community,” weighed in on those and other abortion-related issues at the recent National Pro-Life Summit 2020, a one-day training conference for young pro-lifers, held at the Marriott Marquis hotel in Washington.

“Eugenics is more than just a philosophy. It is directly implanted in policies that target African Americans and minorities,” said panelist Patrina Mosley, director of life, culture, and women’s advocacy at the Family Research Council, a Washington-based research group that supports pro-family legislation and education. “You can abort a child because they’re black, in some states, and you can abort a child because they have a disability.”

Ryan Bomberger, a co-founder of the Purcellville, Virginia-based Radiance Foundation, a group that advocates for human dignity, has spearheaded numerous public campaigns aimed at exposing what he says are Planned Parenthood’s eugenicist roots.

The foundation has used public advertising, including a billboard campaign, to address the fact that abortion rates are much higher among black women, compared with the rest of the population.

Because of the lengths that Planned Parenthood goes to in order to be the primary pregnancy resource in minority communities, Christina Bennett, communications director for the Family Institute of Connecticut, stressed the need to “combat the narrative that Planned Parenthood is the only place people can go when they’re dealing with a crisis pregnancy.”

According to Bennett, connecting women with pro-life crisis pregnancy centers and lobbying state legislatures to support pro-life issues are ways to address the problem.

“In my state of Connecticut, the legislators and elected officials really think that Planned Parenthood is the one serving women of color and low-income women,” Bennett said. “But really, [crisis pregnancy centers] are the ones offering women holistic care.”

When asked about how to reach out to minority communities on the topic of abortion, the panelists advocated forming personal connections with the women, rather than just presenting the facts of the issue.

“Once you identify what they really care about, you can connect it to the issue of life,” Mosley said. “If they want to talk about institutional racism or Black Lives Matter, we can work with that. You don’t have to agree with them on everything, but keep giving them the facts, and let God’s eternal truth do the work.”

Bomberger said that kind of relational development is key to attaining pro-life victories.

“The pro-life movement is today’s civil rights issue,” he said. “We have to work together, and if we aren’t willing to have relationships, we can’t expect much. We have to be able to build friendships.”

Mosley encouraged the African Americans in the audience to tell their pro-life stories.

“In this business, you will be the minority for a while, but that needs to change,” she said. “We need more African Americans in the business of advocating for pro-life policies, at the state legislature, and at the Capitol. No one can tell the story like you of how this systematically impacts you.”