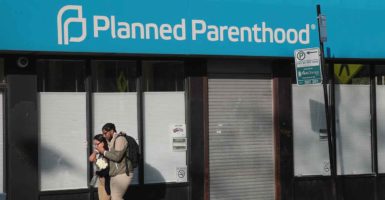 Planned Parenthood broke a record for abortions in a single year, even as its other medical services declined. (Photo: Scott Olson/Getty Images)

It’s been a turbulent last two years at Planned Parenthood, with a leadership shake-up involving the ouster of Dr. Leana Wen as president, and the installment of Alexis McGill Johnson as acting president.

But that upheaval didn’t stop Planned Parenthood from having a banner year in providing abortion on demand, as its new report shows.

The report, which was released quietly this week, states that Planned Parenthood affiliates performed 345,672 abortions from Oct. 1, 2017, to Sept. 30, 2018—the highest number of abortions ever reported in a single year.

Planned Parenthood saw about 2.4 million patients during that time—about the same as last year but down from 3 million as recently as 10 years ago. Meanwhile, the other services Planned Parenthood affiliates offer declined in use.

During this time period, there were:

The increased emphasis on abortion has proven lucrative. In the year that Wen was in charge, Planned Parenthood reported:

Once again, Planned Parenthood’s annual report reveals that the organization will continue prioritizing abortion as other services decline—it is its most profitable line of business.

Therefore, we shouldn’t have been surprised last summer when Planned Parenthood announced it would forgo millions of dollars in federal funding rather than comply with the Trump administration’s new regulations that strengthen the rules in the federal government’s family planning program against funding programs that consider abortion a method of family planning.

Planned Parenthood was unwilling to physically and financially separate its abortion activity from Title X-supported activity, so it stopped participating in the program altogether.

Abortion is Planned Parenthood’s priority, and Americans should not provide the organization with more than a half-billion dollars every year. Instead, policymakers should direct those funds to the thousands of centers that provide health care to women without entangling those services with abortion on demand.

This story has been updated to reflect that Leana Wen was president of Planned Parenthood for one year.