Red Flag?: What We Know About 18 Complaints on Cop Who Put Knee to George Floyd’s Neck 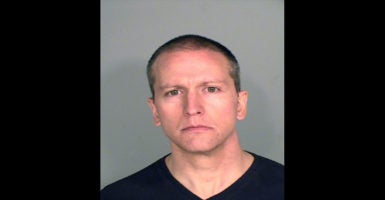 Former Minneapolis police officer Derek Chauvin as he appears in the mugshot taken when he was charged in the May 25 death of George Floyd. (Photo: Ramsey County Sheriff's Office/Getty Images)

Before Derek Chauvin became a national name, Minneapolis resident Michelle Gross was familiar with the veteran police officer and his badge number.

When the video of George Floyd’s death in police custody went viral, Gross—president of Minneapolis-based Communities United Against Police Brutality—got a call from a friend telling her to check social media.

Viewing the video, she heard someone in the crowd shout: “Badge number 1087, you’re not going to get away with this.”

“I’m like, badge 1087, damn, I know that badge number, because I handle this data so much,” Gross told The Daily Signal, adding:

I looked up 1087, and it said Derek Chauvin. I had seen pictures of this guy before and was familiar with him from other complaints. I thought, that looks like Derek Chauvin. I think that is him. I didn’t want to put it out immediately.

It has been reported widely that Chauvin faced 18 formal complaints alleging misconduct during his 19 years on the force before Floyd’s May 25 death in his custody.

Only two of the complaints resulted in a reprimand, both involving shootings by police. Several of the incidents resulted in three deaths, based on published news reports.

After viewing a close-up of the badge number and confirming it was Chauvin’s, Gross said, she identified Chauvin as the officer in the video on her organization’s website and social media sites by 2 a.m.—just hours after Floyd died.

“The idea that he could get away with this for 19 years is outrageous, but we know what the source of it is,” Gross said of Chauvin, adding:

However, with little information available on the bulk of the complaints, it’s difficult to make a judgment on the number alone, contends Jason Johnson, president of the Law Enforcement Legal Defense Fund, a police advocacy group.

“To just look at this superficial number [of complaints] really is not very telling,” Johnson,  a former deputy commissioner of the Baltimore Police Department, told The Daily Signal. “In fact, over the course of a 19-year career, the number is not even really that high.”

According to published reports, two of the deaths occurred during a high-speed chase and another involved a criminal suspect aiming a gun at police.

In one case, Chauvin reportedly shot and wounded someone suspected of domestic violence. One of the three shootings listed in the complaints was done by Chauvin’s partner, not by him.

Chauvin, who has been charged with second-degree murder and manslaughter in Floyd’s death, was awarded a police medal of valor in both 2006 and 2008. The awards, interestingly, were related to two of the complaints against him.

It’s not yet possible to conclude that the 18 complaints against Chauvin should have prompted the Minneapolis Police Department to act on him, and thus prevented Floyd’s death, Johnson said.

“There is a pretty prescribed way that most police departments handle complaints in terms of investigation and adjudication of complaints,” Johnson, head of the Law Enforcement Legal Defense Fund, said.

“It would be similar to a report of a person who has been arrested a number of times and we have no idea what the charges were or what the outcome was of that case,” he said. “Everyone is entitled to due process under the law and a presumption of innocence.”

Minneapolis Police Department spokesman John Elderman did not respond to phone and email inquiries this week and last week for this report.

Over a career of nearly two decades, a total of 18 complaints isn’t shocking for an officer working a patrol-heavy job, said Rafael Mangual, deputy director of legal policy at the Manhattan Institute, a conservative think tank in New York.

“The way he behaved with George Floyd was extremely excessive and abusive,” Mangual told The Daily Signal, adding:

But I don’t think anyone who hasn’t evaluated those complaints carefully can say that’s prima facie evidence that he shouldn’t have been on the streets to begin with. The nature of his interactions with George Floyd certainly is circumstantial evidence of that, but that’s about as far as it goes.

Generally, only about 6% to 8% of complaints against officers are sustained, whether by a citizen review board or a police board, Mangual said.

“Look at the data in New York. A very slim minority of complaints processed in New York are sustained. Most of them are not sustained or [are] found to be unfounded,” he said. “Some police have interactions that are not pleasant. That makes people upset. It doesn’t necessarily mean a rule is violated.”

A majority of the Minneapolis City Council has vowed to dismantle the city police force because of Floyd’s death while under arrest.

Chauvin’s lawyer, Eric Nelson, did not respond to phone and email inquiries from The Daily Signal.

Neither the national Fraternal Order of Police nor the Minnesota FOP responded to phone and email inquiries from The Daily Signal.

When a judge set Chauvin’s bail at $1.25 million Monday, Nelson didn’t contest the amount or the second-degree murder and manslaughter charges. Nelson reportedly hasn’t commented publicly on the case.

Past controversies with Chauvin in Minneapolis include these incidents:

Toles was charged with two counts of felony obstruction, but pleaded out to misdemeanor charges. The Minneapolis Police Department placed Chauvin on administrative leave while reviewing the shooting.

In an interview with The Daily Beast after the Floyd killing, Toles denied trying to take Chauvin’s gun in the 2008 case. Toles claimed that Chauvin broke into the bathroom and began beating him up, and that he was defending himself. Toles said the mother of his child had called police.

For his actions, police gave Chauvin the second medal of valor.

The Daily Signal specified each of these listed cases in an email to Nelson, Chauvin’s lawyer.

The Minneapolis Police Department’s internal affairs records are in an online database, but it provides no details on the nature of the complaints and accusations, according to several media reports.

Johnson, of the Law Enforcement Legal Defense Fund, said a clearly out-of-control, lawless officer probably would have been the subject of more complaints.

“Certainly police departments have a responsibility to ensure that problem officers are dealt with, whether they need to be retrained or they need discipline or [to] be removed from the police department,” Johnson said. “But because there is so little information about what underlies these complaints, what the outcomes of any investigations were, and what if any disciplinary action was taken, we don’t have enough information to know that the Minneapolis Police Department acted properly.”

Three other officers have been arrested and charged as accomplices with aiding and abetting second-degree murder.

They were at the scene May 25 as Chauvin pressed a knee into Floyd’s neck as he lay handcuffed on the pavement.

The Daily Signal left voicemail messages with lawyers for all three former officers.

One of the three officers, Tou Thao, reportedly has six complaints listed in the department’s database, none showing a disciplinary action. One complaint against Thao remains open, but likely won’t be adjudicated since he was fired the day after Floyd’s death, along with the others.

The two former officers charged as accomplices along with Thao are Thomas Lane and J. Alexander Kueng, both reportedly rookies on their fourth day on the job. Lane held Floyd’s legs and Kueng held Floyd’s back while Thao stood nearby, “keeping onlookers back,” AP reported.

“This guy literally left a trail of broken and dead bodies on his way to the jail,” Gross, of the Communities United Against Police Brutality, said of Chauvin. “The idea that he was allowed to continue on the force meant that almost certainly something like this was going to happen.”

Law enforcement officials and organizations strongly condemned the conduct of the officers involved in Floyd’s death.

Minneapolis used to have a citizens review board to adjudicate complaints, Gross said, but the city disempowered the board to the point of essentially putting the government in charge.

“In seven and a half years, they have adjudicated about 2,600 or so complaints,” Gross said. “They have sustained and disciplined 12 of those. That’s less than half of a percent. The national average for civilian oversight bodies is 7% to 8%. We are like the low-end outlier for the country.”

Because a police department spokesman did not respond to inquiries, The Daily Signal was unable to confirm those numbers.

The criminal charges against Chauvin are compelling in the Floyd case, but that doesn’t mean the prior complaints against him were an indictment of the Minneapolis police force, said John Malcolm, director of the Meese Center for Legal and Judicial Studies at The Heritage Foundation.

Malcolm said the 18 misconduct complaints about Chauvin “could be a red flag,” but added that the number in and of itself doesn’t mean he should have been fired or put behind a desk.

In the big picture, not specific to Chauvin, systems across the nation for resolving citizen complaints against police can be abused.

“We also know of instances when gang members and drug dealers make complaints on really good officers, to get them put on administrative leave,” Malcolm told The Daily Signal. “In some cases, complaints could be racked up because an officer is a good cop.”