‘Not Us vs. Them’: Police March in Unity with Peaceful Protesters 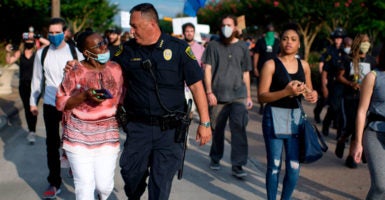 Police across the United States are marching in unity with peaceful protesters who are calling for justice in the killing of George Floyd in police custody in Minneapolis.

“This case is not us vs. them,” said Johnson, former deputy commissioner of the Baltimore Police Department. He added: “It’s not the police vs. the community.”

In Floyd’s hometown of Houston, Police Chief Art Acevedo tweeted that Floyd’s death should be “condemned by all in law enforcement and our extended community.”

Such examples by police also set apart peaceful protesters from violent rioters and looters, Johnson said, whose group provides legal representation for and advocates on behalf of police officers.

Floyd’s death during his arrest last Monday evening also sparked criticism across racial and political lines. Nevertheless, what began as peaceful protests erupted into violent riots in cities across the United States, beginning in Minneapolis and spreading.

Prosecutors charged former Minneapolis police officer Derek Chauvin, 44, with third-degree murder and manslaughter Friday after a cellphone video showed him with a knee pressed into the neck of Floyd, 46, who was lying handcuffed on the pavement and could be heard saying, “I can’t breathe.”

On Monday afternoon, the medical examiner in Hennepin County, Minnesota, determined that Floyd’s death was a homicide because he suffered cardiac arrest while being restrained and his neck constricted.

Floyd was black; Chauvin is white.

Police said officers had arrested Floyd after a store owner said a clerk accused Floyd of passing a counterfeit $20 bill.

Three other officers present when Chauvin had his knee on Floyd’s neck were fired along with him last Tuesday, but none of them had not been charged as of Monday.

In Michigan, Genesee County Sheriff Chris Swanson started Saturday with an overture to a crowd of protesters, telling them: “I want to make this a parade, not a protest. … You just tell what you need to do.”

Someone shouted, “March with us,” and he did. Swanson said it was a spontaneous decision to march with protesters.

In Coral Gables, Florida, police chiefs from across Miami-Dade County knelt in prayer with protesters Saturday, as did the police chief and sheriff in Orlando, Florida, on Sunday.

Such solidarity spread to the Midwest. Police and protesters locked arms Sunday near police headquarters in Bellevue, Nebraska. Police also joined protesters in taking a knee in Des Moines, Iowa.

“The George Floyd death is unique in my 20 years’ experience in law enforcement,” Johnson told The Daily Signal. “We’ve seen rank-and-file labor representatives and the executive level [of police departments] unified in condemning this.”

Police actions in recent years that ended in the death of African American men—such as in Baltimore, New York City, and Ferguson, Missouri—were not as clear-cut, he said.

Although Johnson stressed that Chauvin’s due process rights must be protected and he cautioned against a mob mentality, he said what is known about how Floyd died is inexcusable.

“There may be more information we don’t know. But what we saw, the use of force in the video, this case is completely contrary to how police conduct themselves,” Johnson said. “It defies common sense to believe you can have your knee on someone’s neck and expect them to be OK.”

“Mr. Floyd died in our hands, and so I see that as being complicit,” Arradondo said Sunday night. “Silence and inaction, you’re complicit. If there was one solitary voice that would have intervened … that’s what I would have hoped for.”

A significant number of people in more than a dozen major U.S. cities took advantage of the peaceful protests to riot, looting stores and burning buildings.

“Protests we support. Protest is part of the American idea. Riots we oppose,” Johnson told The Daily Signal.

“I’m worried the riots will get worse before they get better,” he said. “It’s a confluence of events. COVID has forced people to be out of work and [they] have been shut in too long.”