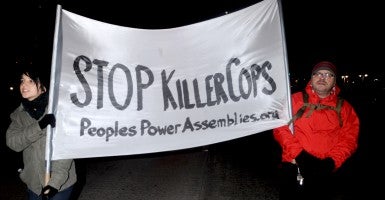 The death of Eric Garner, the black New York man who died after police held him in an alleged chokehold, has sparked an enormous amount of outrage across the nation. A grand jury found the police officer responsible not guilty and individuals on both the left and the right are angry. Unlike the Michael Brown case, there is little question in Garner’s as to what happened, as the event was fully captured on video.

Here are some of the responses coming out on Twitter:

This is one of those moments where left and right could unite. Few seem comfortable with this outcome. Unless recriminations start flying.

Government is simply a word for the things we decide to do together. Like choke men to death over rules governing the sale of cigarettes. — Charles C. W. Cooke (@charlescwcooke) December 3, 2014

Homeless Man: “was #EricGarner your Father?” Erica: “yes” Homeless Man:”He fed me every day.. Bought me a sandwich every time I asked.” @AP

Wow this photo from last night is powerful. http://t.co/es9tveKy90 via @BET #EricGarner pic.twitter.com/xAABvv8f6h

After 100 days of peaceful protests ignored, demonstrators say: “This is not a protest, this is an uprising” #ferguson #ericgarner

Now I say that with cruelty and oppression it is everybody’s business to interfere when they see it. Anna Sewell #ICantBreathe — Becky Bills (@planethealer) December 5, 2014

#ICantBreathe I just can’t understand why you had to choke him…what was so threatening? #myhearthurts

… Security work is stressful and challenging. So while Fed investigation is Prima facie necessary, perspective important (2/2)

Wish I were home, clutching the hands of those I love and screaming #wecantbreathe. Eric Garner, New York won’t stop fighting for you — Lena Dunham (@lenadunham) December 5, 2014

There’s a racial gulf in America in part because to whites, police represent security; to black men, they represent great danger.

THIS IS CNN: Chris Cuomo on @CNN is marching w/ protestors. Told two he interviewed “thank you for marching.” — Laura Ingraham (@IngrahamAngle) December 5, 2014

#EricGarner should never have been involved with #NYPD over issue of selling loose cigarettes. #Hannity

Glenn Reynolds: “We have in this country an issue with police being too quick to escalate force” http://t.co/T2J9rhuKmZ — reason (@reason) December 4, 2014

An e-mailer just told me to pipe down about Eric Garner since the head of the police union said everything was legit. Best one today by far.