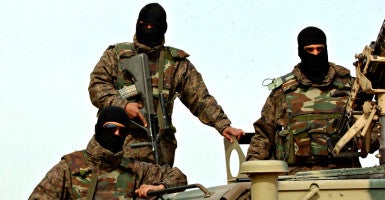 AMMAN, Jordan—The Islamic State, gaining operating territory in North Africa, has made clear its intentions of destabilizing the nascent democracy in Tunisia.

Hoping this sun-drenched Mediterranean nation remains a democratic success story for the region is not enough to ensure that the country succeeds in this post-revolution period.

Keenly aware of a growing sentiment of disappointment in political freedoms, the Islamic State, also known as ISIS, released a series of videos calling upon Tunisians to disrupt and attack their government and ensure that the democratic experiment fails.

If the Tunisian government doesn’t make drastic economic changes, the Tunisians who took to the streets to voice their concerns about lack of opportunity and dignity easily could become fertile recruiting ground for ISIS. Already, more than 6,000 Tunisians have left to fight in Syria and Iraq, and the country supplies the largest group of foreign fighters in Libya.

It’s a startling realization when individuals such as Hosni Kaliya, who survived a self-immolation, are left to wonder whether Tunisia was better off under the dictatorship of Zine al-Abidine Ben Ali.

Kaliya helped ignite the Arab Spring, as did Mohamed Bouazizi, the fruit vendor who died earlier after also lighting himself on fire in protest.

In an interview with the German newspaper Der Spiegel, Kaliya said: “It was all [a] mistake. … I didn’t know what would happen. I no longer believe in the revolution.”

Recent protests across Tunisia illuminated the fragility of the small North African country’s democratic transition—fragility ISIS is all too ready to exploit.

This fragility exists despite what many have hailed as a remarkable political transition, given the Arab Spring’s mixed track record in countries such as Libya, Syria, and Yemen. Tunisia held successful elections at the end of 2014, and the country was honored in 2015 with a Nobel Peace Prize for pursuing a path of peaceful compromise.

Despite the tireless work of civil society in Tunisia, however, economic opportunity—the primary ignition for the Arab Spring here and ultimately the wider region—has yet to be addressed in a meaningful way.

With a stagnant score of 57.6 out of a possible 100, Tunisia ranks No. 114 among 178 nations in the 2016 Index of Economic Freedom published by The Heritage Foundation and The Wall Street Journal.

The country has seen improvements in business, monetary, and trade freedom but declines in labor and fiscal freedom and also increased corruption, according to the index. It lists rule of law and investment and financial freedom as particular areas of concern.

“Various reform measures, including reducing subsidies, reforming the public sector, and enhancing regulatory efficiency, have been undertaken, but follow-through has been uneven,” the index editors write.

Read more about Tunisia Economy.
See more from the 2016 Index.

As people took to the streets in January 2011 in Sidi Bouzid and the movement spread across the country, Tunisians demanded greater economic opportunity and freedom.

But now the likelihood for meaningful economic reform seems even less likely as the political elite of both main political parties, the secular Nidaa Tounes and the Islamist Ennahda, deal with internal politics.

The similarities between the protests in Tunisia and those of 2011 are strikingly evident. Tunisians have significantly more political freedom than five years ago, but the current situation should not be chalked up to disgruntled youth. The anger goes much deeper. It’s about dignity.

The latest protests were sparked  Jan. 16 after a young man, Ridha Yahyaoui, climbed to the top of a utility pole in Kasserine and electrocuted himself.

Yahyaoui had discovered earlier in the day that he had not been selected for a government job. His family describes the job situation in Kasserine as nepotism; only those connected get hired.

Unemployment stands at a staggering 15.3 percent, more than two points higher than when the Arab Spring began. Unemployment for college graduates remains higher than the overall rate, at 19.9 percent.

The south and interior of Tunisia remain worse off than the coast and the capital. Kasserine, in west central Tunisia, has a 30-percent unemployment rate. This shocking figure carries significance, because despite political changes and increased freedoms, the south and interior continue to feel neglected.

During the Ben Ali days, the interior areas purposefully were neglected and underdeveloped. Although the central government’s priority should be to improve the overall health of the Tunisian economy, places like Kasserine are in a dire situation.

Institutional corruption and complicated bureaucratic systems abused by the former regime remain largely unchanged. Reforming state bureaucracies and pursing an agenda of economic liberalization has, at a minimum, been ignored and, at worst, blocked by the few who benefit greatly from the old system.

Ben Ali may be gone, but his subversive ways of buying favor and controlling economic activity live on. The political will to pursue a reformist agenda and liberalize the economy seemingly have been deprioritized as the current coalition falls apart amid internal party politics and as counterterrorism and security continue to be the top priorities. Members of the Tunisian parliament listen to Martin Schulz, president of the European Parliament, during his visit Monday to Tunis, the nation’s capital. (Photo: Mohamed Messara/EPA/Newscom)

Why the Economy Suffers

While it’s easy to argue that Tunisia needs security and stability to get the tourism sector back on track, tourism will not be the cure-all to the nation’s current and long-term economic challenges. The government too often has chosen “social peace” at the expense of the economy.

Last fall, for the second time in 2015, the government agreed to raise the wages of 800,000 public sector workers after negotiations with the powerful General Labor Union. Public sector pay accounts for 13.5 percent of the country’s gross domestic product, one of the largest rates in the world.

Instead of reforming the public sector, Tunisia is adding to an already bloated system that Ben Ali abused to buy favor. Total public employment as a percentage of the total employed workforce currently is 24 percent, three times higher than in Morocco.

Prioritizing and developing an open, fair economic system allowing for direct foreign investment as well as entrepreneurship and innovation will provide the foundation to ensure that Tunisians find dignity through work, provide for their families, and build a prosperous and stable nation.

Democratic transitions are messy and complicated. The stakes are even higher for Tunisia, though, because the alternative is more than just a failed state. It’s another safe haven for terrorists just a short plane or boat ride away from Europe.

Change requires leadership. And while the economic situation in Tunisia can’t change overnight, the course of the ship can.

A recent poll conducted by the International Republican Institute found that 83 percent of Tunisians think the country is headed in the wrong direction. The people in the streets of Kasserine and elsewhere are looking for a plan and a renewed hope that tomorrow will be better.

The United States must remain committed to helping Tunisia make a complete transition. Assistance from the Persian Gulf countries is important in the short term. However, creating a free and open economic and political system for and by Tunisians should be the government’s top priority.

It’s time for the Tunisian government to walk and chew gum at the same time, or else the alternative may well be another ISIS-held territory.