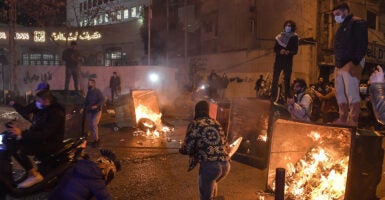 As tensions rise in Lebanon, any civil war that breaks out would threaten U.S. allies, destabilize the region, and embolden Iran. Pictured: Activists clash with riot police in Beirut, Lebanon, on Jan. 12 over the worsening economic situation there. (Photo: Marwan Naamani, Picture Alliance/Getty Images)

Natasha Chernyavsky was a member of the 2021 Fall Young Leaders Program and intern for the Daily Signal.

Over the past few months in Lebanon, tensions have been slowly escalating with the continued collapse of the economy, deteriorating living conditions, and the investigation into the August 2020 Port of Beirut explosion. If not altered, the current trajectory of the nation will most certainly lead to another civil war and potentially decades of violence. The United States has a vested interest in preventing such an escalation.

Any conflict that breaks out would surely threaten U.S. allies, including Israel, and destabilize a region that is already struggling to mitigate the effects of Iran’s growing influence across much of the Middle East.

The top prosecutor tasked with investigating the port explosion issued an arrest warrant this past Dec. 14 for Ali Hassan Khalil, a former finance minister. Khalil has close ties to Nabih Berri, the speaker of Parliament, whose Amal Movement party is allied with Hezbollah, the Iran-backed Lebanese Muslim political party and militant group. Khalil is one of several politicians charged in connection with the blast in Beirut that killed over 215 people and left thousands injured.

The blast was caused when explosive chemicals improperly stored in a warehouse at the port accidentally ignited. The failure to remove the chemicals from the crowded port has been attributed to several factors, including government corruption and port mismanagement.

The investigation into the explosion has stirred anger among supporters of Hezbollah and its Shiite allies from the Amal Movement over alleged “bias” and “politicization” from the lead judicial investigator, Tarek Bitar.

Protests organized in October against Bitar erupted into clashes between armed protestors and the Lebanese Armed Forces that left seven people dead and 32 injured. These clashes in heart of Beirut are concerning for residents who haven’t seen this level of violence since the 1975-1990 civil war.

“All the memories of the civil war flashed back into my mind,” Richard, a Beirut native and neighbor of the author, said. “It was very intense—feelings of anger, of fear, of anxiety, especially about my children. I felt that they will be living what I lived during the civil war.”

Richard is right to worry. The parallels between 1975 and today are eerily similar. In the years leading up to the civil war, Lebanon experienced a banking crisis, Lebanese political elites were in a state of paralysis over the sectarian political system, and domestic tensions over external interference triggered armed clashes between various Muslim and Christian militias.

Today, the nation is facing a collapsing economy, political infighting, and the weakening of the Lebanese Armed Forces. Lebanon’s currency has lost more than 95% of its value to the U.S. dollar since 2019, contributing to frequent power blackouts, fuel shortages, lack of food, and a rise in overall poverty from 42% in 2019 to 82% in 2021. The Beirut port explosion and COVID-19 has only hastened the financial and political ruin.

Civilian unrest and dissatisfaction toward the government is at an all-time high. Instead of responding to calls for reform, politicians have pointed fingers at each other for causing the decline. The Cabinet has not met since October due to boycotts by Berri and his Hezbollah allies over the port investigation, leaving the Lebanese people on their own to deal with the financial crisis.

With resources scarce and the situation only worsening, Christians and Muslims alike are becoming increasingly frustrated, which—as evidenced by the deadly shootout in October—is becoming difficult to contain. Protests are common, but little has changed. Without reform, it is likely that Lebanon’s current trajectory will plunge the nation into another bloody conflict.

The significance of a violently divided Lebanon cannot be overstated, especially in relation to U.S. interests and allies in the region. Lebanon’s previous civil war left over a hundred thousand people dead, many more injured, and Beirut in ruins. A similar outcome is likely to occur should another war ensue.

In addition to the devastation, the outbreak of war and violence would benefit Hezbollah. A civil war could disband the Lebanese military, which would leave an immense political vacuum that would be filled almost instantaneously by the group. BBC reported that Hezbollah could rally 100,000 armed individuals and “fight its way into every corner of the country in a matter of days.”

A Hezbollah-controlled Lebanon would embolden Iranian-backed militias in Iraq and Syria and pose a great threat to the U.S.’ strongest Middle East ally, Israel, which Lebanon directly borders.

If the United States wishes to maintain regional security, it should not ignore what is taking place in Lebanon. The current trajectory of the nation will lead to another civil war and potentially decades of violence in the country. The U.S. has a vested interest in preventing an escalation of war that threatens its allies, in preserving regional peace, and in preventing any further growth of the tentacles of the terrorist-funding state of Iran.