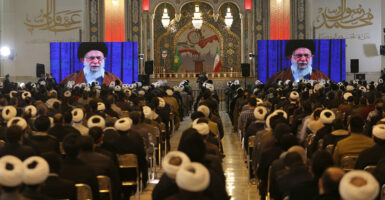 Iran’s theocratic dictatorship, locked into a confrontation with the United States, is drifting into China’s orbit. The Iran-China Comprehensive Strategic Partnership agreement signed in Tehran last March and Iran’s joining the Shanghai Cooperation Organization in September underscore the expansion of political, economic, and strategic ties between the two regimes.

These evolving ties have strengthened Iran’s ability to resist sanctions, eased its isolation, and aided its efforts to achieve regional hegemony.

But Iran needs China more than China needs Iran. Washington should exploit this asymmetry by driving up the costs to Beijing of close ties to Iran, reducing its economic benefits and curtailing the potential benefits to Tehran of close ties to China.

The Biden administration should closely monitor Sino-Iranian ties and work with our allies to mitigate the dangers of this geopolitical alignment. Close cooperation with allies is necessary to enhance U.S. leverage over both China and Iran and help constrain, if not preclude, a full-blown Sino-Iranian alliance.

Specifically, the United States should:

This, in turn, has diminished the prospects for a satisfactory outcome in the nuclear negotiations, encouraged a surge in illicit Iranian oil exports to China, and lowered the barriers to greater Sino-Iranian cooperation.

A return to the “maximum pressure” sanctions policy would not only increase the prospects of a satisfactory nuclear agreement with Tehran, but would diminish the perceived benefits for China of trade with Iran by reducing Iran’s ability to pay for Chinese imports and increasing the risk that the current Iranian regime will be overthrown by Iran’s long-suffering people.

Ramping up sanctions also would undermine Tehran’s capacity to fund its military buildup and finance its network of proxy militias and terrorist groups.

Press China to minimize its support for Iran’s rogue regime. Washington should stress that unless Beijing encourages Tehran to compromise on its nuclear program and end its proxy attacks, Iran will likely continue along its current collision course with the U.S. and its allies. That could undermine Chinese economic interests in the region and disrupt regional oil exports that Beijing depends on.

Washington should apply fresh sanctions targeting the shipping networks and Chinese companies that facilitate this oil trade. China’s economic future depends much more on stable economic relations with the United States than on its much smaller trade with Iran.

Work with allies to undercut Chinese support for Iran. The Biden administration should boost the costs and risks to Beijing of closer ties with Tehran, not only in terms of Sino-American relations but also in terms of China’s relations with other states threatened by Iran.

Chief among these are the Gulf Arab states and Israel, whose mutual concerns about Iran were a factor in the forging of the Abraham Accords. China currently has a much bigger economic and trade relationship with these countries than with Iran, and that imbalance is likely to grow further due to U.S. sanctions.

The bottom line is that the Biden administration should end its self-defeating policy of eagerly seeking to revive the flawed 2015 nuclear deal by relaxing pressure on Iran. Returning to a maximum pressure approach is far more promising.

Such a pivot on sanctions would not only improve the chances for a satisfactory outcome of nuclear negotiations with Iran, but would reduce Beijing’s economic incentives for building closer ties with Iran.