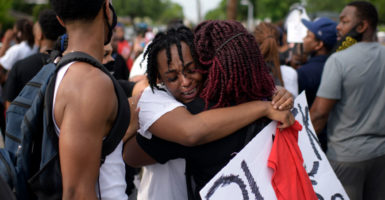 The senseless and completely unjustified killing of George Floyd—an unarmed black man—by a white police officer in Minneapolis last Monday should shock the conscience of America.

While I understand the frustration and anger, I do not condone the violence spreading across this country in response to Floyd’s horrific killing. Rioting tearing apart Minneapolis and cities coast-to-coast will never lead to anything but more suffering. Those who are committing crimes are distracting us from the even larger group of people who are peacefully demonstrating.

But we cannot shrug off Floyd’s killing—along with the killings of so many other black Americans throughout our nation’s history and up through today.

Racism in America is a fatal wound. Every time another incident occurs we put a Band-Aid on it, but the Band-Aid keeps falling off. Band-Aids are not enough to ever stitch this country back together.

The arrest of fired Minneapolis police officer Derek Chauvin on Friday on charges of manslaughter and third-degree murder is a welcome step, but it is just a Band-Aid.

Chauvin is seen on cellphone video kneeling on Floyd’s neck as Floyd lay on the pavement handcuffed and helpless. Other officers with Chauvin did nothing as they watched Floyd die, and should face justice for their inexcusable inaction.

During my 70 years on this Earth I have lived through the civil rights movement, I have seen the highs and lows of this country, I have seen America’s goodness, and I have seen its hatred.

There is no other country like ours in the world—nothing compares to its greatness. But the issue of racism is America’s Achilles heel. It has been embedded into our culture for 400 years, since the first Africans were seized from their homes on the other side of the world and brought to colonial America in chains and enslaved.

The racism experienced by black Americans is not a political issue and to anyone who tries to use it as one, on the left or the right, I say shame on you. No longer should our communities be pieces in a grand chess game.

The promise of the Declaration of Independence that we are all created equal applies to people of every race. This is not about politics—it is about morality.

This country’s founding principles have created a system for injustices to come to light. They are designed to enable the human flourishing of all America’s citizens.

Let’s use those principles to guide us. It’s time America takes responsibility and expands human flourishing to all of its citizens—not just the majority of them.

Americans must speak up and reject the racism and division in their own communities. There has always been a remnant outside the black community fighting for racial equality. It can no longer be just a remnant. Racial equality is something that every one of us, regardless of skin color, must work toward on a daily basis.

Individually, we can make a difference by promoting peace and prosperity for all people, knowing that life is better for everyone when we as Americans succeed together.

It will take courage to speak up, but it is the only way we can overcome racism and the problems plaguing our nation.

Simple acts like starting a dialogue with a neighbor or teaching your children the difference between right and wrong can have a profound impact now and for generations to come.

Nothing can bring George Floyd back to life. But if his horrific and needless death proves to be a turning point to make Americans finally end the ugly racism that stains our nation’s history and afflicts us like a cancer of the soul, he will leave behind a legacy we sorely need.