Dr. Anthony Fauci Predicts How Many Will Die From Coronavirus in America 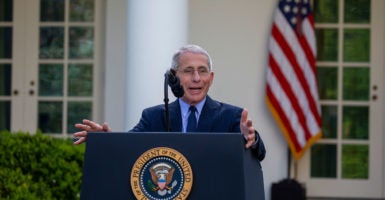 Dr. Anthony Fauci, director of the National Institute of Allergy and Infectious Diseases, speaks in the Rose Garden for the daily coronavirus briefing at the White House March 29, 2020, in Washington, D.C. (Photo: Tasos Katopodis/ Stringer/Getty Images)

Dr. Anthony Fauci, the government’s top expert on infectious diseases, predicted Sunday that the United States will end up with “millions” of cases of the coronavirus and up to 200,000 deaths by the time the pandemic ends, though he cautioned that any projection of mortality statistics could “easily” end up being wrong.

“We’re going to have millions of cases.”

As of Sunday, the United States has more than 125,000 confirmed cases of the coronavirus, and nearly 2,200 deaths. Fauci and other health officials expect those numbers to rise dramatically over the next few weeks as people infected with the coronavirus begin showing symptoms and going into the hospital.

Fauci, who is a leading member on the White House coronavirus task force, also poured cold water on several doomsday scenarios projecting millions of deaths in the U.S. during the pandemic.

He said that models projecting between 1 million and 2 million deaths are “almost … certainly off the chart.”

One projection that has received widespread attention, from Imperial College in the United Kingdom, projected 2.2 million deaths in the U.S., but only if the government and public took no steps to slow the spread of the virus.

State and local governments across the U.S. have taken drastic action to curtail the pandemic. Officials across the country have shut schools and businesses, while placing strict limits on public gatherings.

Fauci said that those so-called social distancing measures will likely have to remain in place well into April in most areas, especially in coronavirus hotspots like New York City, New Orleans, and Detroit.

Dr. Anthony Fauci says there could potentially be between 100,000 to 200,000 deaths related to the coronavirus and millions of cases. “I just don’t think that we really need to make a projection when it’s such a moving target, that you could so easily be wrong,” he adds. #CNNSOTU pic.twitter.com/F2MOHY3xl4

Fauci also cautioned against the reliability of fatality estimates.

“I just don’t think that we really need to make a projection when it’s such a moving target that you could so easily be wrong and mislead people.”