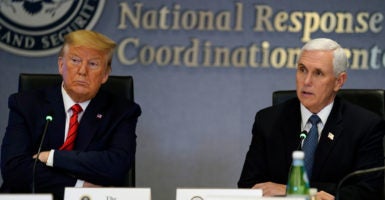 A study of the coronavirus by Imperial College London paints a truly frightening picture of what could be. Pictured: President Donald Trump and Vice President Mike Pence preside over a teleconference with governors Thursday at the Federal Emergency Management Agency's headquarters in Washington. (Photo: Evan Vucci/Pool/Getty Images)

Millions of Americans dead, thousands more waiting to die for want of medical equipment in short supply, and all because a few blithe revelers wanted to go to the bar.

A recent study by Imperial College London paints a truly frightening picture of what could be.

But is this even possible?

In short, not likely, although we may come close if we’re not careful.

An Axios-Harris poll found that somewhere between 1 in 3 Americans and 1 in 4 Americans fear death from contracting COVID-19, the disease caused by the new coronavirus.

The good news for them is that high-end estimates for mortality is 4%, and a random individual almost certainly will not die from this disease. However, this is little comfort to the families of those who do die.

The figure most often cited is the 2.2 million Americans who may die as a result of 81% of the population being infected if no control measures are put in place.

As we have seen, measures to suppress and mitigate the spread of COVID-19 have been implemented throughout the U.S. It is unlikely that we will realize the 2.2 million deaths that the study projects, but that doesn’t mean that we can rest easy.

With mitigation efforts, policies designed to slow the spread of infection rather than fully prevent infection, the study projects half the number of deaths due to the infection. That would be tremendous progress, except that it means that 1.1 million Americans would die.

This would occur because even with mitigation efforts, the study projects the number of infected Americans who need to be hospitalized still would exceed the capacity of intensive care unit beds by a factor of eight.

This is the unfortunate situation already facing Italy as that nation’s number of critically ill patients has exceeded their critical care capacity.

Doctors in Italy have been forced to have to choose to reserve ventilators for younger, relatively healthier patients who stand a better chance of living. As a result, the death toll in Italy has surpassed that of China, where this global pandemic began.

As of this writing, New York state leads the country in confirmed COVID-19 infections, with over 5,000 cases. The state maintains a stockpile of 2,000 ventilators, so if the number of cases grows much more, officials may find themselves in a similar situation similar to Italy’s.

The study shows that the best hope for maintaining disease levels below America’s critical care capacity is to follow a suppression strategy.

Suppression seeks not to slow the spread of disease but to reduce the current number of cases. Strategies to suppress infection are more comprehensive, with the aim of eliminating human-to-human contact to make transmitting the virus nearly impossible.

But how accurate is this study?

Like all projections and models, it is only as good as the assumptions and data that goes into it. Imperial College London built a good model. It is based on models built for pandemic influenza and simulates the activity and infectiousness of hundreds of millions of individuals.

The model takes into account age, household size, population distribution, and even the average school class size and staff-student ratio in each community.

The Imperial College researchers then simulated the spread of COVID-19 through normal interactions at home, at work or school, and in the community, based on observed rates of transmission for the disease.

Researchers simulated strain on health care system based on observed rates of hospitalizations and average durations of those hospitalizations. By now, we have an unfortunately large amount of data available for COVID-19, so the Imperial College model is very good.

That said, it mainly paints the worst-case scenario. Researchers derived the 2.2 million deaths from the highest transmission rate along with a complete lack of mitigation or suppressive efforts.

That is, the coronavirus at its most virulent combined with Americans at our most blasé will result in up to 2.2 million dead. Obviously, neither of those conditions is true.

Also, the researchers determined that 30% of hospitalized patients would require an ICU bed. According to the Centers for Disease Control and Prevention, the proportion of hospitalized patients who would require critical care ranges between 20% and 30%. Since the study was meant to inform public policy, researchers used the high-end estimate—the actual rate likely will be lower.

Finally, one weakness of all models is the research subject.

Human beings are notoriously unreliable creatures and nearly impossible to model accurately. Researchers simulated transmission of the coronavirus by counting opportunities for contact within a setting (home, school or work, in the community); each mitigation strategy eliminated one or several potential settings for contact.

The model can’t account for those working actively against the spread of the disease. For instance, a simulated individual who potentially was exposed to the virus but washed his hands before being able to inoculate himself with the virus would be spared from contracting the disease.

Even within a household, families may prevent transmitting the virus with physical distance and by vigilantly disinfecting surfaces.

In the U.S., the Centers for Disease Control and Prevention has provided simple and effective guidance for all to follow.

President Donald Trump is asking us all to help buy the country time to get ahead of the virus:

This afternoon, we’re announcing new guidelines for every American to follow over the next 15 days as we combat the virus.  Each and every one of us has a critical role to play in stopping the spread and transmission of the virus.

For younger Americans who are less likely to develop a life-threatening disease, Trump had this to say:

It’s important for the young and healthy people to understand that while they may experience milder symptoms, they can easily spread this virus. And they will spread it indeed, putting countless others in harm’s way.  We especially worry about our senior citizens.

Americans can defy the projections by taking responsible actions to prevent the spread of COVID-19.