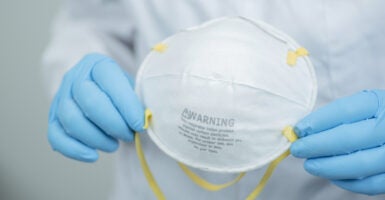 Maxillofacial surgeon Dr. Stephen Skoly declined the COVID-19 vaccine because he is a survivor of Bell’s palsy facial paralysis, and the medical advice, consistent with medical literature, was to not risk vaccination. For this, the Rhode Island Department of Health suspended his practice. (Photo: athima tongloom/Getty Images)

After six months of suspension, Rhode Island, in its munificence, has permitted the “defiant” maxillofacial surgeon Dr. Stephen Skoly to reopen his medical practice. Of course, in the mind of the state, the suspension was always Skoly’s own fault. If only he had submitted.

When the vaccine mandate for health care workers was promulgated to be effective Oct. 1, 2021, Skoly had the temerity to consult his personal physician and study the medical literature. He was a survivor of Bell’s palsy facial paralysis, and the medical advice, consistent with medical literature, was to not risk vaccination. Bell’s palsy paralysis is dormant in your body, and vaccination may incite a reoccurrence.

For Skoly, N95 masking was a breeze. He is a dental surgeon. Around patients, he is always N95-masked, and wears a surgical shield, gloves, a gown, and engages in other safety precautions far in excess of the mere N95 masking required for vaccine exempted health care workers.

There was more. Skoly has natural immunity. Having continued to serve the community throughout the epidemic, Skoly had contracted COVID-19, most probably while serving a patient at the state’s psychiatric hospital or prison (where, in addition to his private practice, he worked as a dental surgeon).

Certainly, Skoly thought, between his safety precautions and natural immunity, the state would permit him to practice without vaccination. The state was rational after all, wasn’t it? Prior to the Oct. 1, 2021, effective date of the vaccine mandate, Skoly explained to a reporter why, for medical reasons, he could not be vaccinated.

Immediately, the press branded him as “defiant,” and the Rhode Island Department of Health suspended him from practice. As it exempted over 300 other health care workers from vaccination, so long as they were N95-masked, the state continued to refuse to treat Skoly the same—to allow him to practice his livelihood while N95-masked.

Many suffered. Skoly tried to keep his staff but could not: He was forced to lay off 10 workers—parents with children and mortgages. What happened to his hundreds of private patients, many in mid-treatment? He tried to refer them to other dentists, but the waiting lists were monthslong. His patients at the psychiatric hospital? Rhode Island tried to hire a replacement but could not. There is a shortage of maxillofacial surgeons in Rhode Island.

But the prison system did find a workaround the Rhode Island dental surgeon shortage: At a cost of tens of thousands of dollars, the prison flew in weekly a surgeon from out-of-state to replace Skoly.

Unemployable, Skoly himself applied for unemployment benefits. Benefits were denied. He had made himself unemployable as a doctor by not being vaccinated, he was told. And he was also told he could always apply for a job at Walmart.

But he did get an answer as to why the state could not just treat him like an exempt medical worker and let him keep working so long as he was N95-masked. He had opened his “big mouth” and gone to the press, making his suspension a political, not a medical, issue. The state does not tolerate any questioning of its vaccine conduct. The only option offered by the state was submission—be vaccinated or have your livelihood destroyed.

Skoly sued, as is still one’s right in Rhode Island. A hearing was scheduled for mid-March 2022. He retained two of the nation’s most experienced COVID-19 doctors and researchers to testify to the irrationality of Rhode Island’s COVID-19 policy, particularly its refusal to recognize natural immunity as being more durable and effective than vaccine immunity.

Three days before the hearing, Rhode Island altered its policy. The new COVID-19 safety rule required health care workers to be vaccinated or N95-masked in the presence of patients. The court hearing was adjourned as unnecessary.

Rhode Island stated, in writing, that it would be irrational to treat the vaccinated and N95-masked workers differently—just as Skoly had been arguing since October 2022.

It has not been easy. Skoly’s staff had scattered. It has been difficult to locate new hires. But the process has begun, and patients, denied treatment for months, have returned. And new patients have come, many saying that they want to be treated by the man who said “no” to the state.

The process is not over. Rhode Island continues to refuse to recognize the effectiveness of natural immunity. With COVID-19 variants, there will be new “emergency” rules and mandates. No Rhode Islander is safe from a new vaccine rule that arbitrarily throws someone out of work. Skoly has been there and has survived. It is not likely that he would survive another arbitrary suspension.

But, for now, he has “won.” He is working. He is free to take his physician’s medical advice about his personal medical treatment. He is free to speak his mind about public issues such as the vaccine mandate.

The victory is partial and bittersweet. How many Rhode Islanders—police officers, firefighters, teachers, office workers—have been forced from employment because they would not vaccinate? For Skoly, a battle has been won. The cost was high. The war continues.