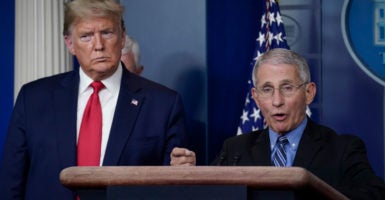 Before his name and face became ubiquitous to Americans through news coverage of the coronavirus pandemic, Anthony Fauci made his mark as a key figure working to end the AIDS epidemic in the 1980s.

Fauci, a 79-year-old Brooklyn native, also gained media attention after the 9/11 terrorist attacks, when he made the case for a stronger defense against bioterrorism.

A veteran medical researcher and career immunologist, Fauci has testified before Congress multiple times. He has served as a public health adviser to six American presidents.

The son of a pharmacist and grandson of immigrants from Italy and Switzerland, Fauci has been part of the National Institutes of Health since 1968, when he was hired as a clinical associate.

A gifted academic who graduated first in his class with an M.D. from Cornell University Medical College in 1966, Fauci reportedly was an ardent New York Yankees fan in his youth despite growing up in a neighborhood dominated by Brooklyn Dodgers fans.

Fauci currently is rarely out of the public eye as a key member of the White House’s coronavirus task force, which President Donald Trump assembled in January with Vice President Mike Pence at the helm.

Fauci’s public comments, and his behind-the-scenes relationship with Trump, have been subjects of intense media scrutiny and speculation.

Here are six things to know about the diminutive, gravel-voiced health care professional as he continues to help guide, advise, and calm the nation.

1. He Spearheaded Fight Against AIDS and HIV

Americans have learned that COVID-19 is a contagious respiratory infection caused by the new coronavirus. The virus was unknown to the medical community until a few months ago, when it began to spread in Wuhan, China.

In the 1980s, Fauci played a leading role in federal research efforts that helped to reverse the spread of another deadly virus, HIV, which causes the disease AIDS.

In the summer of 1981, Fauci has said, he first became aware of a peculiar immune disorder that appeared concentrated among homosexual men.

After becoming director of the National Institute of Allergy and Infectious Diseases in 1984, Fauci “made breakthroughs in understanding how HIV destroys the body’s immune system, and helped develop strategies to restore immune defense,” according to a history posted by the National Institutes of Health. Fauci “led efforts that convinced Congress to dramatically increase funds for AIDS research,” it says.

Fauci is widely credited as an architect of the President’s Emergency Plan for AIDS Relief, created under President George W. Bush.

Over time, he drew praise for his work as an administrator and researcher to combat AIDS, but Fauci was targeted by AIDS rights demonstrators in the 1980s. They went so far as to burn him in effigy.

The anonymous anthrax attacks that took place through the mail shortly after 9/11 largely have faded into history. But at the time, Fauci pushed policymakers to mount a strong defense against potential bioterrorism.

Fauci steered federal funds in the direction of drug companies that potentially could develop vaccines. In October 2011, during the 10th anniversary of the anthrax attacks, he discussed the government’s response in an interview with the Robert Wood Johnson Foundation.

“The biggest threat to bioterrorism preparedness today is complacency,” Fauci said in response to a question about the relevance of the anthrax attacks to contemporary challenges.

“If a health threat does not happen, be it naturally occurring or deliberate, we tend to make it a lower priority,” he said. “The worst thing we can do is make something a priority after it happens.”

3. He Sounded the Alarm on the Ebola Virus

Fauci’s many appearances before Congress include comments he made on the deadly Ebola virus in testimony to a House oversight committee in 2014, when he discussed his agency’s response at some length.

Fauci was less optimistic than other witnesses about the amount of time it would take to mount an effective response, according to some media reports.

Nevertheless, he assumed an active role in the public health crisis and personally treated Ebola victims.

4. He Used to Run Marathons

As he closes in on the age of 80, Fauci remains an avid power walker and jogger. A former marathon runner, he has encouraged others to take up running and jogging during the coronavirus crisis.

He completed the 1984 Marine Corps Marathon in three hours and 37 minutes. He reportedly works about 19 hours a day but finds time to run 3.5 miles daily.

5. He Was Reared, Educated as Roman Catholic

Fauci, who was born on Christmas Eve in 1940, went to Regis High School on the Upper East Side of Manhattan.

He graduated from the College of the Holy Cross in Massachusetts, said to be the oldest Catholic college in New England, where he received a bachelor’s degree in the classics. Both schools are operated by the Jesuits.

In 1962, Fauci entered Cornell Medical College, and the rest is history.

6. He Challenges Media Narrative Against Trump

As some reporters continue to try to pit Fauci against Trump, the immunologist has begun to vigorously challenge that media narrative.

A report in Politico suggested that Fauci suddenly went missing from the national stage (he was back for the White House’s daily coronavirus briefing Tuesday and Wednesday). A story in The Washington Post told readers that Fauci somehow is at odds with Trump during press briefings.

In an interview Tuesday morning on WMAL, a popular news-talk radio station in Washington, Fauci was asked about such reports.

The president has listened to what I have said and to what the other people on the task force have said. When I have made recommendations, he has taken them. He’s never countered or overridden me. The idea of just pitting one against the other is just not helpful.

In the radio interview, Fauci described this media narrative as “really unfortunate.” He said “there are not differences” between the two men, and that the president’s job is to “balance” competing concerns.

“I wish that would stop and we’d look ahead at the challenge; we have to pull together to get over this thing,” he said.