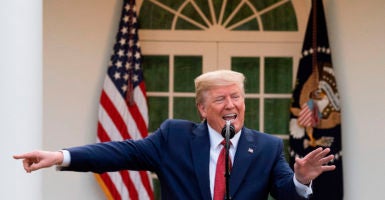 President Donald Trump announced fatalities from coronavirus are likely to reach the highest point in two weeks, then begin to decline. He also said he’s extending the guidelines to slow the spread–that were set to lapse on Monday–to the end of April.

But he added, “Nothing would be worse than declaring victory before the victory is won.” He noted that everyone should continue to follow the guidelines that Vice President Mike Pence has regularly held up at press conferences for the last two weeks.

“Therefore, we will be extending our guidelines to April 30 to slow the spread,” Trump said. “On Tuesday, we will be finalizing these plans and providing a summary of our findings supporting data and strategy to the American people.”

Providing the most decisive estimated light at the end of the tunnel, Trump said, “We can expect on June 1, we will be well on our way to recovery. We think by June 1. We think a lot of great things will be happening.”

This comes after Trump has spent several days talking about the need to reopen the economy, and saying he would love to see things open by Easter. Asked if floating Easter was a mistake, Trump responded, “No.”

Dr. Anthony Fauci, the director of the National Institute for Allergies and Infectious Diseases, said it’s “entirely conceivable” the death rate could read 200,000 with more than 1 million cases without proper mitigation.

“We feel the mitigation we are doing right now is having an effect. It’s very difficult to quantify it,  but the decision to extend this mitigation process until the end of April I think was a wise and prudent decision,” Fauci said.

Dr. Deborah Birx, the White House coordinator of the coronavirus task force, said flu models showed that without mitigation, the United States could have had between 1.6 million and 2.2 million deaths.

“So, we worked very hard together to look at the impacts of the different mitigations that have been utilized around the world and use that evidence base to really bring that evidence and that data to the president to consider for extending–which is not a simple situation when you ask people to stay home for another 30 days,” Birx told reporters. “So, they have to know that we built this on scientific evidence and the potential to really save hundreds of thousands of American lives.”